This Beatles fan, if not quite "fanatical" as such, enjoyed the group's foray into filmmaking, Magical Mystery Tour. While it might not be magical, it has its appeal for some of us.
"They're promising to take me away!"
Willingly I went along for the bus ride, sharing the "coach", as they call tour buses in the UK, with a sorting of interesting and odd characters. Through the frequent stops in various towns, villages, and fields, the crowd's buffoonery becomes the scenery. The production involved a lot of made-up shenanigans, and at times it shows. There is that unscripted "let's just have fun" vibe to most of the 53-minute running time. And there are those great Beatles songs to give the picture some solid ground, even if a lyric mentions a walrus and we see a "walrus", and a line speaks of a "fool on the hill" and what we get is Paul McCartney playing not so much a fool, but a bored-looking bloke standing still, on a hill.
Though critics at the time of MMT's original television showing in December of 1967 complained of being bored stiff, today's rearview mirror of some 50+ years rates the flick as an interesting, if not exactly absorbing, artifact. Unique among the telly tableau of the mid-sixties, the Beatles-authored experimental film plays better today....though many fans now still list this creative tour as a rare Fab Four trip.
The DVD contains a few extra features: I'm interested to hear what Magical Mystery Tour booking agent and organizer Paul McCartney has to say.... 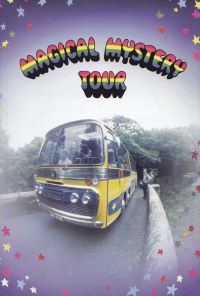