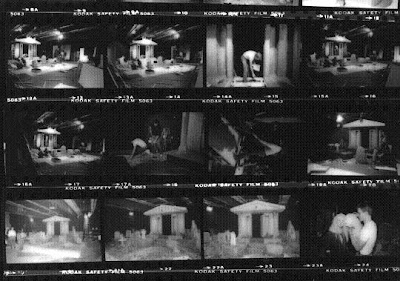 I reopened my Graveyard Shift files recently and was sent back to 1985, as I reviewed photos, memos, call sheets, and sketches related to that film's production. Affixed above is a partial contact sheet of photographs I took right before commencement of the 'graveyard set' shoot.

The bottom right photograph is of the late Tim Mogg, the talented special-makeup artist who went on to enjoy a prolific career.
Posted by Simon St. Laurent at 10:08 PM No comments:

Next to the symphony orchestra, mankind's most beautiful creation, to me, is the aeroplane. Music to my ears, in addition to a great flying machine: The Avro Lancaster bomber and its four Rolls-Royce Merlin engines in synchronization.

The postings on this blog with some of the biggest hit counts are those regarding RAF Bomber Command No. 626 Squadron, with which my father flew during the war.  I thought it time to add a little more information regarding his operational record.

Here is a partial list -- culled from material provided to me by Dave Stapleton of The 626 Squadron Research Project -- of "ops" flown by Flying Officer A.R. Screen and crew:

With the Allied forces now advancing well into Germany, Bomber Command now turned its attention to humanitarian sorties and 626 Squadron was similarly tasked. (The Squadron’s Lancasters were converted to carry sacks of food in the bomb bays. Each aircraft carried 284 sacks; these were dropped from 500ft.) The crew flew two of these sorties:

Special thanks to:
Dave Stapleton
The 626 Squadron Research Project
Copyright 2010 ©

A few weeks ago I was telling a friend how young these guys were who flew in RAF Bomber Command. My dad was nineteen; his crewmates would have been that age or a year or two older. I joked with my buddy that if this particular aircrew was known for doing something special during the war, and a movie were made about their experiences, the guy in the role of my dad would probably be an actor in his late twenties or early thirties. And Flying Officer Screen would no doubt be played by someone like Johnny Depp.

Film producers, who aren't known for being a bright lot to begin with, often miss on details like the above.
Posted by Simon St. Laurent at 7:34 PM No comments: