Soon I will add more 'brat' postings, my stories of growing up in a military family.

Since the first of the few was filed more than a year ago I thought I should pack them here for easier viewing. (Click on the "In this episode" link.)

Notes from a Dependent Brat: CF-104 "Starfighter"
In this episode:
A young man learns just how loud the CF-104 Starfighter is, especially when there are five of them, flying just metres above.

A Nightmare on Elm Street (From a Dependent Brat)
In this episode:
A pint-sized cineaste learns about the 'ratings system'.

Notes from a Brat: On and Off the Ice
In this episode:
A little creep must show the world how smart he is.


Next week, on Notes from a Dependent Brat....

"Goin' Fishin'!"
A bunch of pocket fishermen decide to drop their strings in a local creek. Hilarity ensues when their mothers find out....
Posted by Simon St. Laurent at 11:29 AM No comments:

My late RCAF father had a way with words, especially when it came to his favourite sport. Watching the third period of tonight's NHL matchup between the Pittsburgh Penguins and the Toronto Maple Leafs reminded me of his choice of words and their unique phrasing. 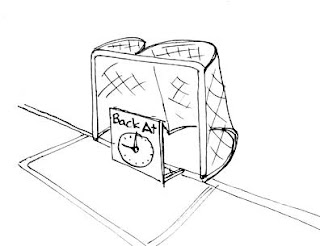 Does the Average Canadian Care About Remembrance?

While on my way to work here in Toronto this morning I could not help but notice that poppies were almost nowhere to be seen. I saw one fellow subway train traveller sporting the powerfully symbolic artificial flower.

Many years ago I watched a documentary on the World Wars where at the film's conclusion historian Dr Noble Frankland spoke of his concern that future generations could lose any understanding or appreciation of the selfless sacrifices in those devastating conflicts.

The number of people wearing poppies is not necessarily the indicator of how much of this understanding and appreciation there is out there, but to me it certainly is the domestic canary.

While watching a telly piece a few minutes ago regarding today's U.S. presidential election, I thought:

"Clinton will win, without question....but you never know."

There's "reality" and there's "irreality". And we'll know the answer to that tomorrow morning.
Posted by Simon St. Laurent at 7:37 AM 4 comments:

Notes From a Brat: On and Off the Ice

Dyte Hall was our local hockey rink when my family lived at CFB Borden. Along with the Andy Anderson Arena, the Hall, a large brown-brick structure, one which may or may not have been a purpose-built building, was the place where my ice hockey career began and ended. It was there where I scored my few goals and let in more than a few goals (my team was a bad one). On weekends I would often saunter over and catch whatever ice hockey action was on tap; at times my favourite sport was not on the schedule ("Broomball? No!").

One of my strongest memories of the hall, besides Nancy Getty blowing a puck by me as we attempted to thwart a girls' team, is of schoolmate Mike Walker skating across the ice between the face off circles in front of my goal and delivering one of his wicked slap shots: I caught the puck in the fore of my right arm, right at the joint, effectively doing my job; unfortunately, the disc of smokin' rubber struck the seam in my protective equipment, rendering my catchers' mitt useless as it dangled beneath my now powerless arm. ("Systems Failure!") However, by shifting my hips I could get some life out of the glove. Thankfully the power loss lasted just a few seconds. A most memorable Sunday afternoon.

The most powerful memory for me of Dyte Hall did not happen on the ice:

The Base Borden Minor Hockey Association held a fundraiser one lovely weekend; one could buy a series pass in order to take in all the games, or single tickets. Since one of my friends had a pass, I decided there was an effective way to maximize its potential. My friends and I gathered in front of Dyte Hall and I, on the spot, hatched a plan:

As 'author' I initiated the devious cycle. With pass in hand I somewhat apprehensively and self consciously approached the ticket table. There was no problem in executing my plan; the pleasant ladies smiled and said "thank you". Once safely through the checkpoint I made for the mens' room and passed the pass through the opened window to one of my waiting buddies outside.

Norman was next in line; as per the by now perfected routine he entered the special transfer room and proceeded to hand off the pass. Guess who decided to relieve himself at that moment....you guessed it: Norm's dad! A man born and bred in England could only say one thing after quickly figuring out what sneaky and reprehensible act played out before him: (Something like) "You little bastard."

Needless to say I "heard" about it all afterwards, and Norm, being the son of a Brit in the Canadian Armed Forces, no doubt "got it" afterwards.

You must not forget, dear reader, that although the punchline did not involve me directly, I'm the fellow who drew up the plan. I was, as Wally Cleaver may have stated, the "little creep!".
Posted by Simon St. Laurent at 8:19 PM 2 comments:

With Remembrance Day almost upon us, I thought about a story of my own regarding that special day; and its special symbol: The poppy.

In early November in the late 1980s (I'm thinking 1989), I hopped onto a TTC (Toronto Transit Commission) subway train car. With the seats being all but fully occupied I took the famous door position as the doors closed behind me. Sitting on the other side of the car, with his poppy box resting on his lap, and looking sharp in his uniform, was a veteran.

Immediately I remembered that a few minutes earlier I had shoved a two dollar bill (remember those?) into my shirt pocket. I approached the vet as I drew out the money. He got up from his seat and carefully pinned the poppy to my lapel. I thanked him and went back to my first position. Then, all of a sudden, and in the style of an over-directed film, several other riders popped open their purses and pulled out their wallets.
Posted by Simon St. Laurent at 11:07 AM 6 comments: