Toronto in a Haze of Heat and Humidity 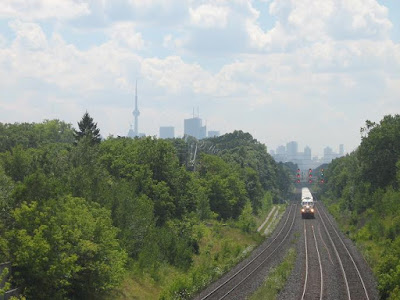 Looking west! Somewhere in there is the C.N. Tower and Toronto's downtown core.
Posted by Simon St. Laurent at 9:10 AM No comments:

Tonight I watched an episode of the CBC 'comedy' series Schitt's Creek and I got a flashback: Seeing comedic actors Eugene Levy and Catherine O'Hara ply their trade in material far away beneath their talents reminded me how funny they were in the classic Canadian comedy series SCTV.

I discovered the show when it was titled, simply, Second City Television. How we stumble upon a certain television series, especially one that goes on to great heights, has long interested me. In the case of me and SCTV it all started in early 1977 through my weekly scans of TV Guide magazine. For many weeks I would note the listing for something called Second City. It would appear with the numbers 6 and 41, which translated as the Global Television Network. ("Global" in those days was the new kid on the dial but it delivered a fine range of fare; unlike the plastic rubbish can it is today, and has been for years.)

One evening I decided to sit down and sample this "Second City" thing. I liked it. My fifteen-year-old head got much of the humour. I did not know it at the time but what I had watched was an episode from the first batch, which was produced at the Global studios on Barber Greene Road in Toronto.

I had to tell others of my great discovery, one I categorized as a video equivalent of David Livingstone's discovery of Victoria Falls....well, Mosi-oa-Tunya, more properly.

Mum! She'll be my first convert. As this week's episode unreeled on the Zenith, she and I sat in silence. That's right, as in "no laughter". I wanted to laugh but I realized that emitting anything even mildly resembling a positive reaction might read as lacking class to my British born and raised mum.

End credits: The next day I brought up the issue with my mother. "Why didn't you like it?", I asked, darn well knowing the answer about to come my way. My dad overheard this and became curious as to what serious discussion was playing out before him: "What's that?..."

I figured it was prudent to let mum answer: "Oh, it's called Second City. They're trying to do a Monty Python but it doesn't work."