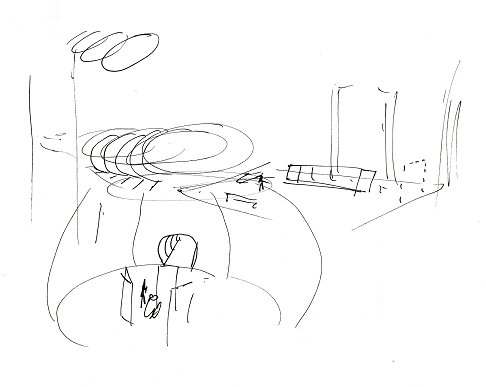 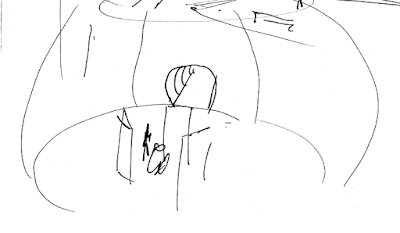 Posted by Simon St. Laurent at 9:18 AM No comments:

A Forever Question: Pomp and Circumstance

“Since before your sun burned hot in space and before your race was born, I have awaited a question."
Sir. In the animal world, are cats royalty?

Last night TVOntario premiered its one-hour documentary Magic Shadows, Elwy Yost: A Life in Movies. It was good, the subject matter helped, but it could have been twenty or thirty minutes longer. While I very much like the one-hour doc format -- it works for many subjects -- it can suffer from a broken and fragmented structure when trying to cover a lot of ground.
But, it's definitely worth watching. For those of us who watched faithfully the OECA/TVO programmes Magic Shadows and Saturday Night at the Movies, the memory circuits flooded and oozed last night.
Posted by Simon St. Laurent at 9:15 AM No comments: 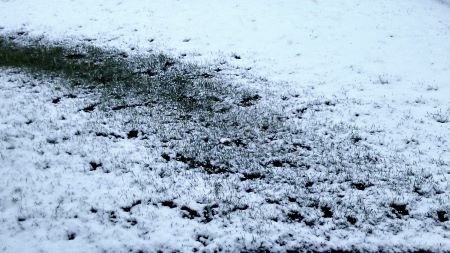 This reminded me that last winter Toronto did not get a lot of snow. There were no snowstorms... and no cold snaps, outside of the odd cold day. Apparently, this year we are targeted for more of the white stuff and ice stuff.
Posted by Simon St. Laurent at 8:53 AM No comments:

A Special Documentary to Air This Coming Saturday

Magic Shadows, Elwy Yost: A Life in Movies is to air on Saturday, November the 27th. And I'm to sit in front of my "tube" tuned to TVOntario at 8pm Toronto time (ET).
Two weeks ago I wrote a little piece on this hot doc.
Posted by Simon St. Laurent at 12:27 PM No comments:

Theatre Books was a pretty wonderful go-to place for those of us who worked in "the arts" here in this great city. When I moved to Toronto in 1984 someone alerted me to this bookstore. Trying not to spend too much money there was the hard part. I was in film school, after all, and that was priority, but I did lay down some mid-eighties currency to grab those books which I considered essential and relevant to my studies, like: the American Cinematographer Manual.
In 1992 Theatre Books moved a short distance, to a grand house on St. Thomas Street, where it stayed for years. Spadina Avenue, just north of King Street, became home in 2012. I visited, but the digs were much more conservative, the booklist much tighter. One day while doing some business down in that area, I decided to pop by and it was gone. A couple of pleasant young gents who ran a clothing store next door told me that Theatre Books had closed down suddenly, but the rumour was it would resurface somewhere else. That never happened.
One day last week I pulled a book from one of my bookshelves and a certain marker brought back memories. By the way, the layout on that book marker is pretty rough... this I noticed while preparing the scan.
Postscript: Toronto Star article on Theatre Books' closing....
Posted by Simon St. Laurent at 8:23 PM 1 comment:

A Forever Question: On the Wrist

“Since before your sun burned hot in space and before your race was born, I have awaited a question."
Sir. Would a watch be best called a "glance"?

Sunday Fun: It's the World We Live in Now

I was at my laptop. I had the device plugged into some a/c (alternating current).
As it had been plugged in since early this morning I thought I should check to see where the recharge was at....
I swear it said: "Fully vaxxed (100%)"

Posted by Simon St. Laurent at 9:33 AM No comments:

Many of us let the Toronto Sun twist and fizzle in its grief. While these meltdowns at Toronto's simplest 'newspaper' play out, we enjoy the letters editor's comments on a daily basis.
My favourite today:
"(He’s unserious and has already done so much damage to our country and will continue to do so as long as he is in office)"
I must be living somewhere else.... 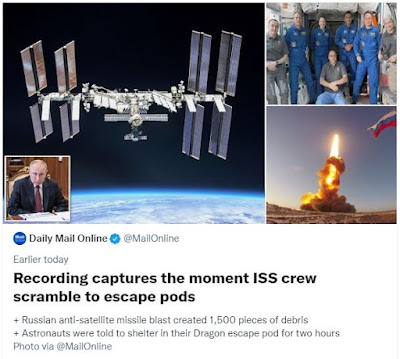 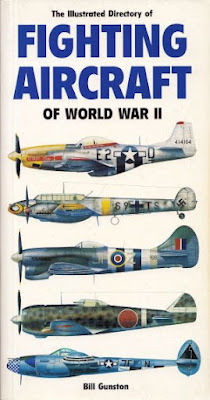 The Illustrated Directory of
Fighting Aircraft of World War II
Written by
Bill Gunston
Salamander Books Ltd.
1988
Posted by Simon St. Laurent at 12:00 AM No comments:

A Forever Question: It's Sad

“Since before your sun burned hot in space and before your race was born, I have awaited a question."
Sir. Is saddism bad?

This afternoon I had BBC Radio 2 cooking while I worked. They played an Adam Ant song. I've known about the New Wave singer since high school.
Today I learned that Mr Ant's real name is Stuart Leslie Goddard.

Posted by Simon St. Laurent at 7:04 PM No comments: 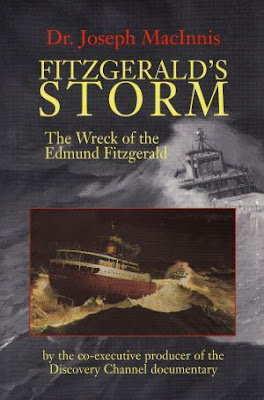 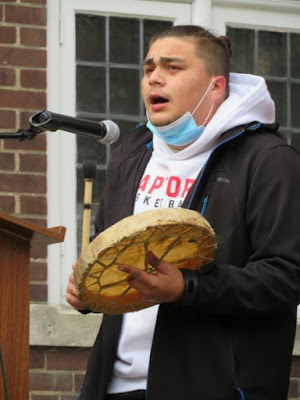 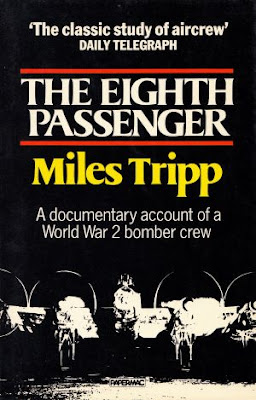 The Eighth Passenger
- A documentary account of a World War 2 bomber crew -
Written by
Miles Tripp
Papermac
1985 (reissue)
Posted by Simon St. Laurent at 8:26 AM No comments:

Last night I watched a fine feature length documentary on WWII. Produced by the National Geographic Channel, "Inside WWII" overviews, in the hyper-speed mode so typical of info-dump docs made these days, the 20th century's largest conflict.

Some of the interview subjects explain why they joined the war. I remember the day in 1984 when I finally got around to asking my own father why he enlisted and why he chose RAF Bomber Command:

"I was pissed off. I was doing poorly in school and my mind was on the war overseas."

His rationale for joining the bomber force as a gunner was expedient:

"You got overseas quickly that way . . . It was an eight-week air gunners' course in Montreal."

(He knew that flying as "aircrew" in Bomber Command was dangerous work. Many young men, men too young, got "The Chop".)

As was the norm at the time in this neck of the woods my dad was sent to the CNE (Canadian National Exhibition) grounds for dispersal. From that famous Canadian site began the process of getting "shipped overseas", but as this was wartime it wasn't quite that easy. German U-boats roamed the North Atlantic in search of prey, and a steamer loaded with fresh faces was a prime and highly-prized target.

I will stop here: The above bits and pieces are stressful enough, never mind the few combat stories my dad did let out over the years. (While on one of my trips to England, as part of my ongoing research on RAF Bomber Command I spoke with historian Martin Middlebrook and he gave me some sage advice which I understood too well: "Don't ask your father. He won't tell you anything.")

A few years after the war ended he joined the RCAF and enjoyed a long career with Canada's finest service.

I left the best for last; the big "and" part of my dad's explanation for wanting to see action overseas:

(A childhood friend did not come home; he died when his bomber was shot down over France. Kinda sobering, ain't it?)

Passions of the time, those were.

My father loved Germany and the Germans. We moved to West Germany in October of 1966, just twenty-one years after he flew in a Lancaster bomber doing a job he felt he must do. 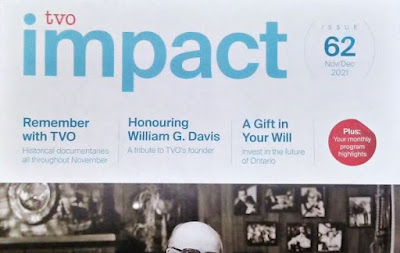 When I first heard that TVO was working on a feature length documentary about legendary, at least in these parts, movie-lover Elwy Yost, I had flashbacks to all the movies he programmed over the decades... and all the "film people" that he interviewed, not just actors but interesting creatives and techs of all kinds.
I had all but forgotten about, what is to me, one of the most anticipated docs of recent years.
This proud TVO Supporter decided to open that envelope, the one mailed to me a few days ago, the one which contained the latest issue of TVO Impact magazine, sitting unloved on my desk.
As soon as I pulled out the folded mag from the hastily-torn envelope, I 'knew it'. "That's Elwy!"
Magic Shadows, Elwy Yost: A Life in Movies premieres on Saturday, November 27th, at 8pm. 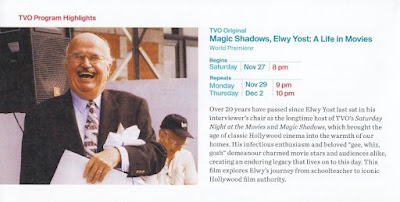 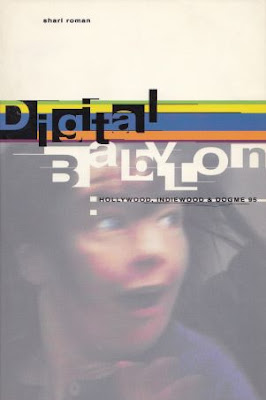 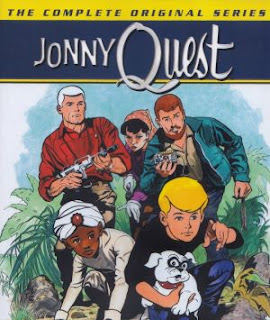 “Since before your sun burned hot in space and before your race was born, I have awaited a question."
Sir. If one wants to screw someone over, what's best, clockwise or counterclockwise?

Sunday Fun: How Much Do I Love Cats? This Much....

There are lots of cute 'enhanced' comedy shorts on YouTube, but Jurassic Park But With a Cat may be the funniest I've stumbled upon. It certainly is much better than the film it draws from.
Posted by Simon St. Laurent at 10:06 AM No comments:

The combination of Godzilla and Toho film studios makes for a formidable tag team. The famous Japanese production complex is so synonymous with the rubber-made monster that it's hard to believe that it actually has produced non monster movies.

However, the purpose of this piece is to go for the studio's biggest star: Godzilla.

In the late summer of 1988 I became friends with a chap who had been living in the same building as me for four years. We hit it off right away once we decided to converse with one another. He, Richard, was in the midst of his physics master's degree program at the University of Toronto, and I, a recent film-school graduate, was working very occassionally as a designer on films and television commercials.

How tickled I was when he told me that he was a big fan of the Godzilla pictures.

A pot of tea, a bowl of unhealthy potato chips, two geeks in front of a VCR-powered television set: Godzilla; Godzilla vs. the Smog Monster; Godzilla vs. Mothra; King Kong vs. Godzilla; Destroy All Monsters; Godzilla, 1985; you get the picture.

Richard earned his PhD, and I stomped around in the film and television business.

Michael Coren on Tonight's Edition of The Agenda 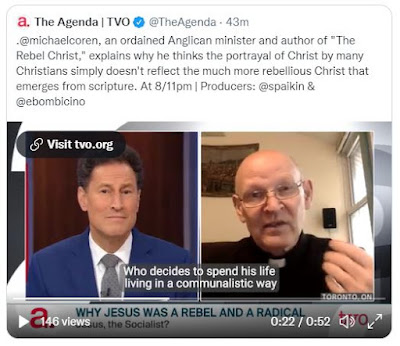 I'm in the process of reading Rev. Michael Coren's latest book, "The Rebel Christ", and I can say that I'm enjoying its breezy and accessible writing style, with its ideas conveyed in convincing logic -- even to this atheist.
Tonight at 8pm, and repeated at 11pm, is an interview with the book's author. Steve Paikin, host of TVOntario's outstanding public affairs programme The Agenda, no doubt will ask the big questions.
One must always have an open mind....
Posted by Simon St. Laurent at 3:39 PM No comments:

A Forever Question: The Pain, The Pain

“Since before your sun burned hot in space and before your race was born, I have awaited a question."
Sir. Would "stubbing one's toe" be better expressed as "agonizing one's body"?