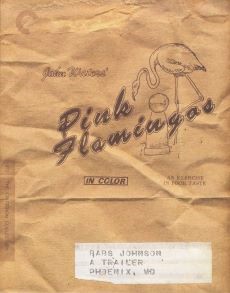 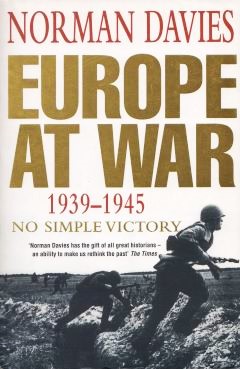 “Since before your sun burned hot in space and before your race was born, I have awaited a question."
Sir. Is "Full Stop" anything like "Half Stop"?

Posted by Simon St. Laurent at 7:31 AM No comments:

Sunday Fun: No Work Being Done at the Desk 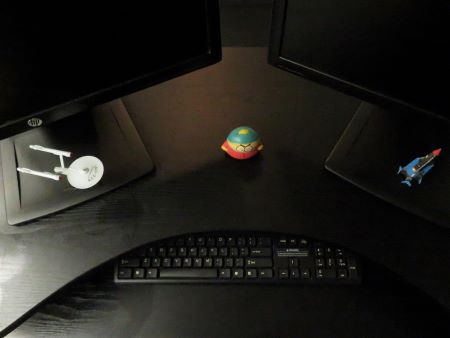 A "film and television" critic and writer I much admire, John Kenneth Muir, some weeks ago posted a blog piece looking at his home office. I was impressed by his large collection of film/tv toys, models, and dolls. I felt insecure as my abode is pretty spartan, at least there's not much in the way of 'geek' elements to reveal too much about my youth.
Recently, while polishing my computer desk, I looked down and noticed bits I'd long blanked-out. One gets used to his or her surroundings and fails to notice what 'signifiers' there are; over and above the layer of dust....
For those readers who may not be familiar with the above photo's captured items, from left to right: U.S.S. Enterprise (from Star Trek); Eric Cartman (South Park), Thunderbird 1 (Thunderbirds).
___
Postscript: I've not seen South Park in years, but I've long wondered if the German translation of South Park's resident kid-grump is "Erich Cartmann".
Posted by Simon St. Laurent at 1:04 PM No comments: 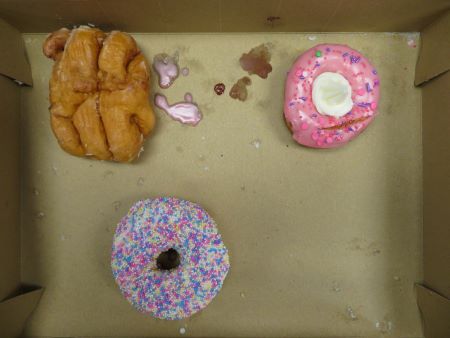 A client brought the above box of Tim Hortons donuts as a thank you for my hard work tackling an issue. My first reaction, as it did come with a large coffee, was something akin to elation. Then I realized it was a dozen donuts. Of course. It was a big box.
While I do like the odd unscheduled kick of sweets, I'm hardly a 'sweet tooth', nor do I possess the constitution to deal with a load of donuts before they begin to become day-olds. There are three sugar-trips left. Since Sunday I've managed to force down nine donuts. There's a reason I'm skinny and in fine shape. I don't eat a lot of donuts... unless required....
One thing I hate is food waste.
Posted by Simon St. Laurent at 8:01 PM 1 comment:

A Forever Question: A Chapter

“Since before your sun burned hot in space and before your race was born, I have awaited a question."
Sir. Is it the end of an era?

Posted by Simon St. Laurent at 5:53 AM No comments:

Battle of Britain Day 2022: Book on the Battle 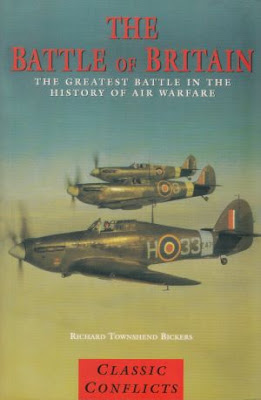 Salamander Books Ltd
1999
Posted by Simon St. Laurent at 8:42 AM No comments: 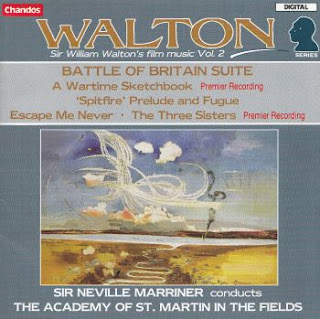 Sir Neville Marriner Conducts
The Academy of St. Martin in the Fields 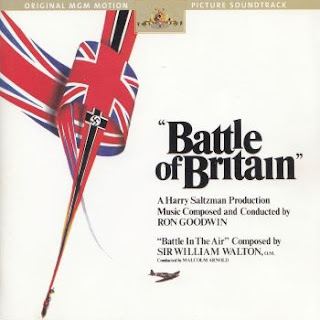 "Battle in the Air" Composed by
Sir William Walton
Posted by Simon St. Laurent at 8:40 AM No comments: 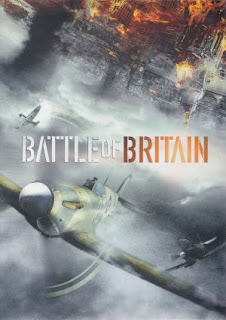 My dad took me to see Battle of Britain when it hit the CFB Baden-Soellingen movie theatre. We were living in then West Germany, specifically in a small town, surrounded by Germans, which somehow enhanced my movie-going experience. Not only do I love the sound of that language but in this movie the Germans actually speak Deutsche.

To illustrate how big of a deal this movie was at the time, there was a live-from-London television special one evening celebrating its premiere. German television network ARD or ZDF (I can't remember which) picked up the live feed: There were searchlights and men dressed in vintage uniforms manning an ack-ack gun placement. I could hardly wait to see the movie.

Unfortunately, producing-studio and distributor United Artists lost a lot of money on Battle of Britain. The film did not 'travel' much outside of Europe (read: the USA), which it had to do in order to make back the investment. As a tie-in documentary hosted by actor Michael Caine outlined most effectively, regular folk, including those on the Isles, could tell you next to nothing about the battle. And this was less than thirty years after the events. The idea of an ignorance of one's own history as being an 'American' thing is a false one. (Author Clive Cussler recounts a sobering personal experience in his non-fiction book, The Sea Hunters, where he was taken aback by some of his fellow Americans ― politicians in this case ― not knowing, or, more importantly, not even caring about their own history.)

As a child what I liked was Battle's spectacle: The wide-screen; the colour; the music; the you-are-there vibe.

The now-defunct "Festival Theatres" repertory chain here in Toronto would screen the film every few years, and I would be there with interested friends.

As I've told people over the years, "Battle of Britain was my Star Wars."

Posted by Simon St. Laurent at 8:38 AM No comments:

As part of a downsizing project [twelve] years ago I purged most of my pre-recorded VHS tapes. I've never been a big collector of movies ― my DVD library is fairly small ― but the fact is I had accumulated around 70 tapes:

Battle of Britain (1969) A troubled production complete with massive cost overruns and a shoot that seemed to have no end, this historical aviation epic provides some satisfaction for those movie fans who want to see a breed of filmmaking that will never be seen again. No film company today could afford to make a film like Battle of Britain, at least not one using exclusively the same production methods ― much of it would be done using fake CG fakery, by people who've never taken the time to see how an aircraft, like a Spitfire or Heinkel, twists and turns in the sky. (Try YouTube.) As far as the film as a film goes: It depends on whether the viewer can enjoy a 132-minute story about a critical moment of history. The Royal Air Force's warding off of the mighty German Luftwaffe during the summer of 1940.

What one sees are grand air battles and an abundance of name-actors (at that time, of course). Christopher Plummer, Susannah York, Laurence Olivier, Michael Caine, Curt Jurgens, Robert Shaw, and Trevor Howard are a few of those stars who play historical characters or 'average people' swept up in that pesky thing we humans almost never ask for but often get: War. In this case World War II.

A highlight of many: The Battle in the Air. It makes me a firm believer in cinema's capabilities.

Kudos must go to director Guy Hamilton (1922 - 2016) for giving a somewhat unwieldy story, one with necessary density, some personality; and for remembering the people, who are so often forgotten in these epics.

Posted by Simon St. Laurent at 8:37 AM No comments:

The poster said all I had to know. On September 15, 1990, there would be a celebration to remember on the River Thames. That of "Battle of Britain Day, 1990". This history buff did not plan my trip to coincide with the event, but I was in London, England, and would be around to attend the fireworks.

I stood among a large crowd on the river's south bank, metres upstream from Tower Bridge. The sky darkened, the vintage searchlights fired up, probing and irradiating a low cloud ceiling. All that was missing was the drone of unseen Heinkel, Dornier, and Junkers aircraft. The Blitz was terrible for London's denizens throughout the summer of 1940, so nobody was celebrating the act of war, but the repelling of invaders... German "Luftwaffe" bombers. (Since there had been no definitive and crippling blows to the Royal Air Force, necessary if Unternehmen Seelöwe [Operation Sea Lion], the invasion of England, was to have any chance of succeeding, Adolf Hitler lost interest and turned his attention to the east.)

Music blazed from sparking loudspeakers as fireworks of all colours and stripes rose streaking from a barge anchored to the sparkling waters before us. For many Brits here, this sight and sound must have been emotional. I too was feeling it: Composer Ron Goodwin's magnificent themes for the films Battle of Britain and 633 Squadron were the perfect accompaniment, and helped lift us all up high. (Aces High!)

That event was the 50th anniversary of the great battles fought in the skies over England. Now we're at 82.

Posted by Simon St. Laurent at 8:36 AM No comments:

Battle of Britain Day 2022: Final Thought for the Day 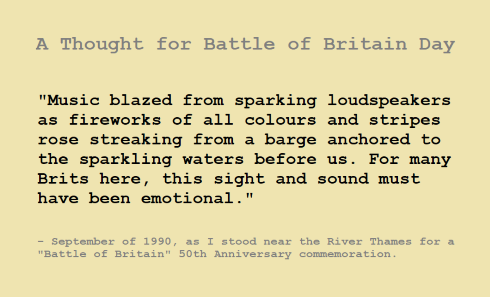 "Music blazed from sparking loudspeakers as fireworks of all colours and stripes rose streaking from a barge anchored to the sparkling waters before us. For many Brits here, this sight and sound must have been emotional."
― September of 1990, as I stood near the River Thames for a "Battle of Britain" 50th Anniversary commemoration.
Posted by Simon St. Laurent at 8:35 AM No comments: 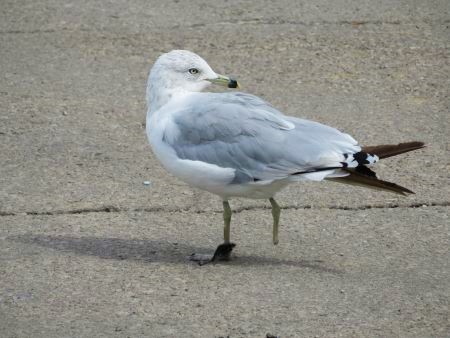 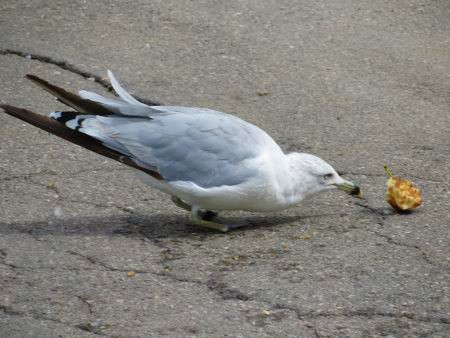 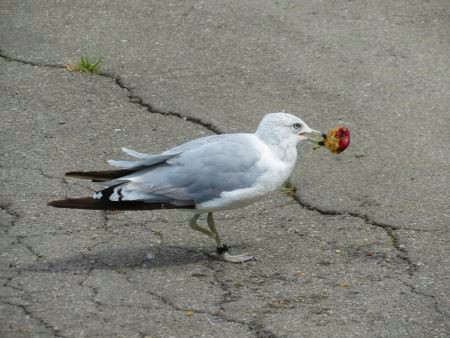 Posted by Simon St. Laurent at 8:45 PM No comments:

A Forever Question: It's in the Book

“Since before your sun burned hot in space and before your race was born, I have awaited a question."
Sir. How could I forget that date?

Posted by Simon St. Laurent at 7:30 AM No comments: 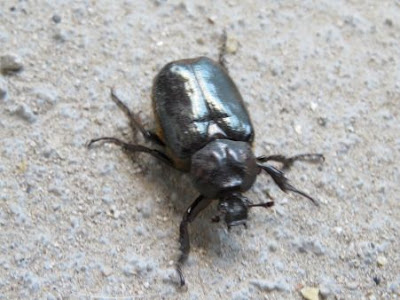 I haven't seen him since the summer of last year. No doubt he's out explorin'!....
Posted by Simon St. Laurent at 10:30 AM No comments: 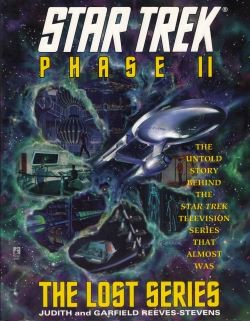 I'm just old enough to have remembered Star Trek first airing but I must have missed it. Maybe my parents saw the trailer on CTV for the opening episode, "The Man Trap", and its great and scary monster, and made the decision to make sure I missed it.
CTV (Canadian Television) actually opened the series two days before NBC, on September 6, 1966, effectively the "world premiere".

The charade had to last but a few weeks: In October we left for West Germany, and I did not see the series on ZDF, ARD, or the two French channels. (However, I did watch the telefantasy series' Voyage to the Bottom of the Sea, The Invaders, and The Prisoner on French and/or German television.) ZDF began running Trek in 1972, which I found out about a year ago.

I first saw Star Trek in June of 1970. My British cousins were watching it on BBC2 ― in colour ― and I joined them in silence while visiting.

Back here in Canada, CTV's flagship station, CFTO, began its long run of "stripping" Star Trek. In September of 1970 a regular Monday to Friday at 5 p.m. screening schedule started the magic for many of us. What is this exciting, striking, beautiful, and colourful show?, I must have pondered at the beginning as I got lost in Trek's vortex. This was a communal experience for many viewers, for in the syndication market it was a true "water cooler", certainly "water fountain", television series.
My own private joke regarding my own fandom: It was just five years ago that I bought the complete series on Blu-ray. Before that I had just odds and ends on VHS and DVD. As for the Blu-ray format, I've watched just one episode.
But I am a fan.

How many dramatic television programs are, or will be, remembered fifty-six years after they hit the video airwaves? 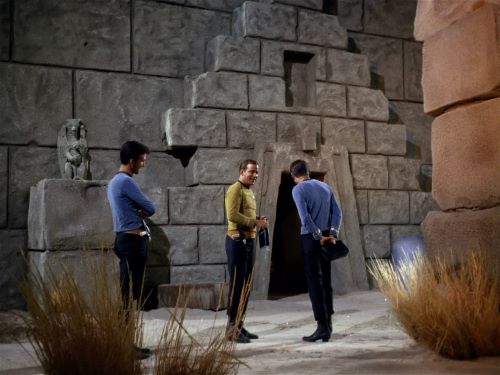 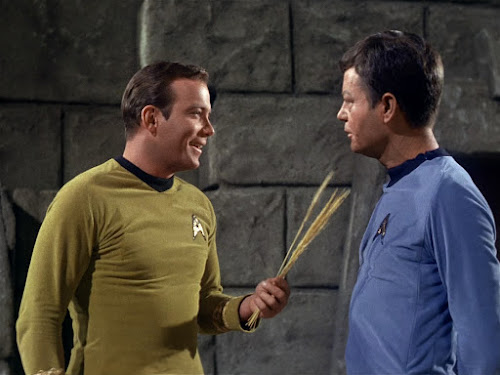 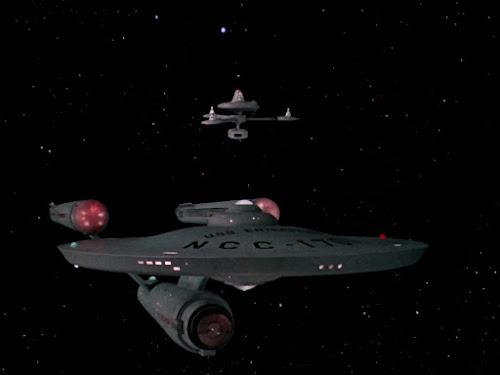 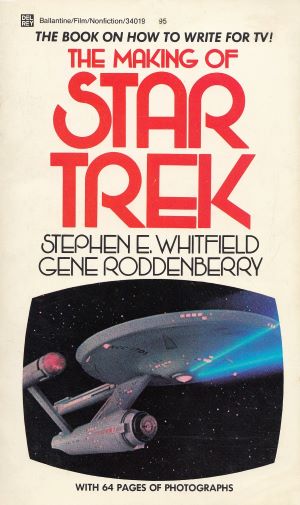 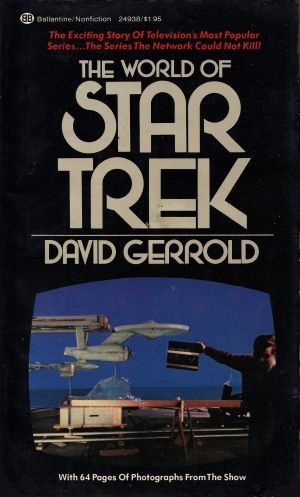 Posted by Simon St. Laurent at 9:14 PM No comments:

Me on the Difference in Canadians and Americans

"Canadians go through life without feeling a need for a publicist."
Crude in its generalization, and meant with a fair degree of levity playing on the stereotypes, but some might run with it. (I've been told there are no differences.)

Posted by Simon St. Laurent at 7:21 AM No comments:

Book: The Lives of the Great Composers (Schonberg) 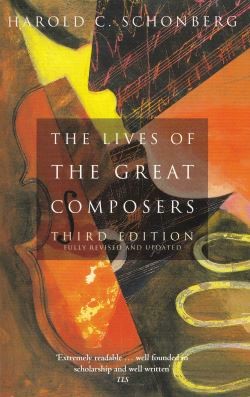 The Lives of the Great Composers
- Third Edition -
by
Harold C. Schonberg
Abacus
1998
Posted by Simon St. Laurent at 10:00 AM 1 comment:

A Forever Question: The Shape?

“Since before your sun burned hot in space and before your race was born, I have awaited a question."
Sir. Why does Sammy Sausage sell wieners?

DVD: The Beatles - Get Back 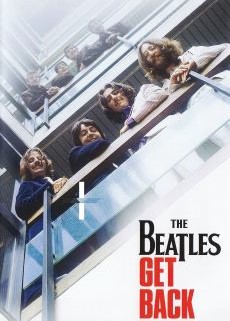 The Beatles - Get Back
by
Peter Jackson
Apple Corps Ltd
2022
Posted by Simon St. Laurent at 1:01 PM 1 comment: 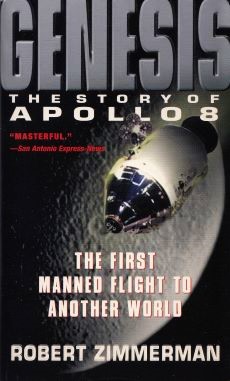 Genesis: The Story of Apollo 8
― The First Manned Flight to Another World ―
by
Robert Zimmerman
Dell Publishing
1998
Posted by Simon St. Laurent at 12:07 PM 3 comments: 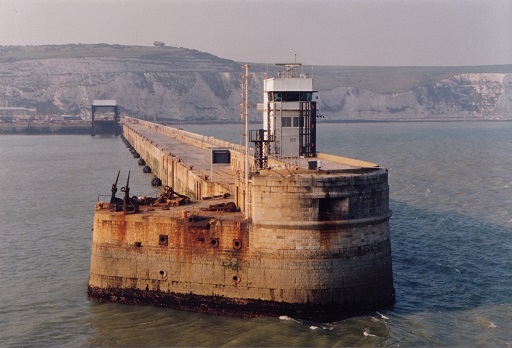 Posted by Simon St. Laurent at 6:58 PM No comments: 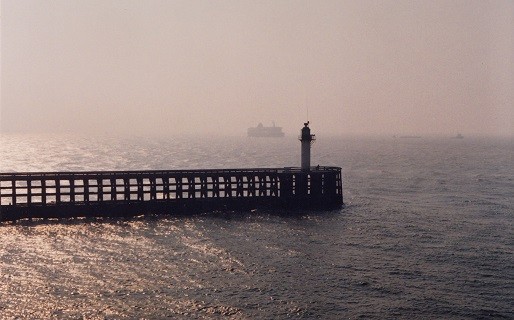