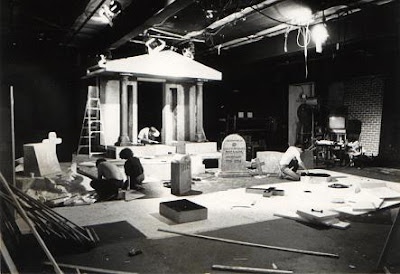 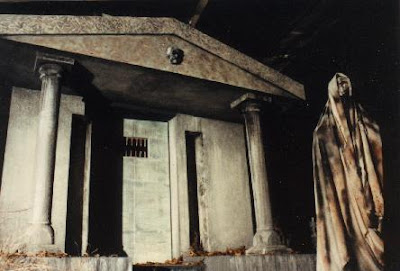 Back in the summer of 1985 a received a call from a friend of mine, who also filled the role of 'film school' classmate, to tell me that there was an ad running in that week's issue of Now Magazine looking for crew members for an unnamed feature film.

I called the number provided in the classified and spoke to the production's line producer, a guy by the name of Peter Boboras. He asked me if I could do anything in particular, and I answered by saying that I had recently done two years of design school. After little time had passed Peter asked me to come down to the production office -- on Sullivan Street in Toronto -- and we would talk.

During the interview I showed a selection of sketches and designs in addition to photographs of various 'miniatures' I had done. Peter said that in the current draft of the script there was a need to build a miniature of tents in a desert. "I can do that." I was more or less hired on the spot. It should be noted that the story was not called Graveyard Shift at this point and it was not even a horror film, but rather an adventure. Just to convince the film company that I could work fast and require little in the way of funds to make miniature scenery, I spec built a futuristic structure table top model, complete with two landing pads... for whatever might want to land. Next I took deep-focus 35mm photographs of this concoction so I did not have to drag it into the office and to show how something, with the proper shooting, could belie its small size.

As the new school year approached (1985-1986) the project in question was still moving along. Peter told me one day that Graveyard Shift was the production's new name.

To make a long story short, my main responsibility was to design a graveyard set -- a film within a film, or rather, a music video within a feature film. I swung into action immediately by going down to the Toronto Reference Library, remember, this was years before the Internet, to look at clipping files of graveyards -- the real kind and those in the movies. Also, I journeyed to the Mount Pleasant Cemetery with sketchbook in hand. I took my camera too but decided that I would make myself draw the various mausoleums; this way, you are forced to study the shapes and contours of the buildings which helps you understand more what you are trying to reproduce in the film studio.

In addition to the studio set I would illustrate 'floating' flats for the picture's music video scenes.

The producers had rented me a small space in the old Massey-Ferguson factory complex just south of King Street. (It is no longer there as it was razed years ago.) I remember it being toasty warm with a nice set of loading doors; actually it was part of a loading dock, as were all the units around us. An interesting area, it was, with little side-streets -- more like back alleys. This was where I built my set, as a bunch of pre-fabs. In the actual film studio we would fasten the sections together to make a whole. My wonderful hard-working crew consisted of Mark Lang, Chris Leger, and Dave Fiaconi. (My brother Jon also helped out when he was not with the main crew. He functioned as a Production Assistant before the shoot started, often helping the art department, and was a grip when 'principle' got rolling.)

The film studio was on George Street, here in Toronto. It was a small studio fit for a low-low budget production, and for teaching a novice production designer that you must always visit the space before you drag your pencil across the drawing velum. I thought I was doing the right thing by asking someone what I thought were the right questions: "What is the fly?" On this query by me I was given a bad dimension from the other party. I seem to remember it being "sixteen feet". Perfect. Well, it was until I eventually went down to the studio to check 'er out myself. As soon as I saw it I could tell that the ceiling was no where near the spec given to me earlier. The studio manager told me it was just over twelve feet (to the beams). That's great, I thought. The mausoleum I designed is over twelve feet tall. Not to overly trust anyone at this late juncture, I popped out the tape measure and checked myself. Time to redesign.

I got home, went to my drafting table and scratched out the mausoleum's entablature. "That'll do it! That easy." Sure the building looked odd and unbalanced but that is what happens. (I elected not to scale it down as I knew it would look foolish and not unlike the Stonehenge bit from the movie Spinal Tap. The door would have to be shrunken down... fit for 'Cousin It' from the old TV show, The Addams Family. The audience would laugh.)

What helped make the job enjoyable, and I was having a good time, not to mention learning a lot, was that the film's director, Jerry Ciccoritti, was well versed in 'art things'. When I showed him my earliest sketches he could ask for things in certain terminology, making my job easier as there was no "this thingy here" talk to confuse me. Thinking back we did not have to get into full blown conversations -- they were always to the point.

Peter Boboras arranged to send David Rayfield, the film's art director, and who would be responsible for painting the set, and I to the Canadian Opera Company's fabrication shop for some informative lessons with their master painter. We were shown how to simulate marble and concrete with brushes and sponges. My god, did I learn a lot in September and October of 1985. Of course, the learning never stops.

By the way, the columns for my mausoleum would be rented from the CBC, so I designed the set to contain them. I made sure that the length given me was correct... as I did not need anymore surprises, needless to say. Such an error would be crippling, especially if the columns were longer than the dimension supplied to me. After all, I could not cut down rented pieces to fit my set. An assortment of tombstones/headstones was also rented from the CBC. Of course, my crew and I could easily make them, and we did make several, but since the Corp had replicas in the prop department, it made perfect sense to grab those, too.

To build up the 'ground' so as to not have a nice-looking mausoleum sitting on a flat studio floor, even a dressed one, we rented a bunch of 'risers' (and their 'tops') from CFTO studios. These would be erected on the George Street studio floor and my building would sit up on top of that, adding to the effect of uneven ground. I should mention that I used (reinforced) 3/4 inch plywood on the floor of the structure as I knew that the actors would be running and walking around on top -- we did not need feet punching through during a take and then yelling for all to hear, "where's St. Laurent?!"

Everything was more or less going according to plan. Everything was ready at my end of things; the main unit would be shooting in the studio later 'that week'. In the meantime, I would attempt to show up to some of my classes at school. Well, folks, you do not know the meaning of "a scene right out of a movie" until I explain what happened next: One day I got home from school, opened the door to my apartment and met a ringing telephone. I ran over and picked it up. It was Peter Boboras:

"Simon, you gotta round up your boys and put your set up tonight. The crew is in there tomorrow."

"What? I thought it was happening on Thursday."

"It was, but they moved it up to tomorrow."

Time to make a quick series of phone calls. It was 5 p.m. I had about 15 hours to make a show.

In late October of 1985, my wonderful crew in all their dedicated glory worked with me in the studio that night to make a graveyard. Sure, finances and time were very tight, but the results were rewarding for us all.

Top, top (b&w) -- At about 4 a.m. I stood in the north-east corner of the studio and took this picture as the set was starting to come together. Left to right: Michael Toke, Ellen Atkin, Rae Crombie (painting at door of mausoleum), and Chris Leger.

Bottom, top (colour) -- The completed set. I took this picture (along with many more) the morning after the crew had wrapped up shooting in the studio. Mere minutes after the still photography session, the demolition crew of two and I pulled out the crowbars and went to work.
Posted by Simon St. Laurent at 9:41 PM