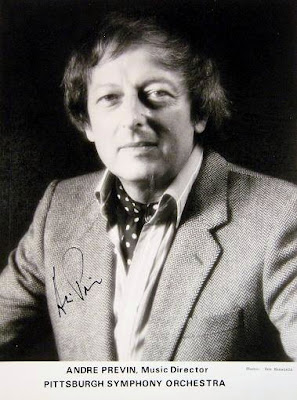 When I was nineteen or twenty years of age I decided to collect some eight-by-tens of orchestra conductors. Back in the days before the Internet the process of getting mailing addresses for the various orchestras was not too much of a problem: My local library, like most of the kind, had reference books for such a task. I collected several contacts. In the name of good public relations I always got a response; a large size envelope containing an eight-by-ten glossy.

André Previn was one of the few who did not autograph the photo with the all-important prefix, "To Simon". Maybe he was out of town that day. At that time he was in the middle of his tenure as the principal conductor of the Pittsburgh Symphony Orchestra.

He is to kick off my little series because he is André Previn.
Posted by Simon St. Laurent at 9:27 AM