Reading about art of all kinds is something I enjoy. What is the backstory behind that painting, sculpture, or piece of music? Having grown up with series television like most people, I was furnished with an interest in reading about that art form, even if it may arguably be a lesser art form. As for books about movies, I devoured Kenneth Macgowan's history of the motion picture, "Behind the Screen", in my first year of high school. Two years later it was Arthur Knight's "The Liveliest Art", with many more to come.

In fact, 'it' started earlier: One of my elementary schools had, filed in its library's racks, copies of "The Making of Star Trek" (Stephen Whitfield) and "The Making of Kubrick's 2001" (Jerome Agel). Due to the popularity of the former, the school library had two copies of its "making of". How complex pieces of entertainment are put together makes for fascinating reading if you are interested in the art and business of film and television. (Films and television programs of the science fiction strain tend to have the making-of books; for obvious reasons, I suppose. Give me a book on the making of All in the Family, someone, please.)

A few years ago I read a book about the original "Doctor Who" series. As it was a television program I watched in my youth it too made for interesting reading. I mentioned the book to a friend of mine who also grew up with Who. As it turned out, he too had read it. He cracked me up when he added: "Very often it's more interesting reading about the show than actually watching it." Very true.

(Contrary to what Globe and Mail television critic John Doyle may think, most television is best enjoyed as a television schedule listing.)

More interesting to me is the history and business of television. It's a form that occasionally, if rarely, pops out a fine dramatic or comedy series. Fighting off Theodore Sturgeon and his pesky "law" is essential. Somehow art is produced. 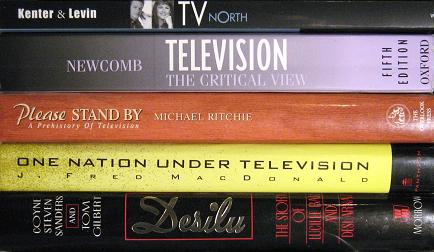