While listening to the radio a few years ago I heard a piece about whether or not it's cool to let the little ones open their gifts the night before Christmas. This reminded me of my childhood in then West Germany.

As is the tradition in that great nation, opening the boxes and wrappings is done the night before. A then little one, me, not only did not complain but decided then that Germany is one great nation. I remember well one Christmas where our landlord and his wife came up to say hi and to present us with presents. I remember mine: a Matchbox toy of an early 20th century automobile.

Roll back a few years to my first Christmas in Germany. Santa Claus back in 1960s Deutschland was not a big thing ― if you'll pardon the expression. Saint Nick, however, was. Well, let me tell you what that man did to this then five year old. I remember being summoned by my parents to the entry way of our apartment. Standing beside the door was a tall figure, a woman (probably a teenager), dressed up in full Saint Nick attire. My mother said "look dear" as she pointed at my shoes which were parked neatly on the mat. I saw it, an inanimate thing in one of my shoes... a lump of coal. ("Noooo!")
I, dressed fashionably in what some crude folk might refer to as a "wife-beater shirt", held both hands up to my face and started crying. My parents laughed. It was not funny. 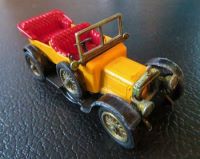