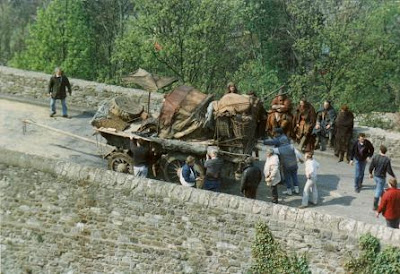 When I arrived at the main gate the security guard, a rather pleasant older chap, said to me with no hesitation, "you're in today for free, mate". Of course, I asked why... it could not have been the fact that I looked, walked, and quacked like a Canadian, especially since I had not even quacked at that point.

One could not help but notice that a movie was being shot: There were a few facades placed in strategic locations, flags flapping from the turrets, and an artificial rocky addition to the castle's main entrance.

A few years later I showed some pictures I had taken to an aspiring art director friend of mine and her reaction was "I love this stuff... this is why I want to be an art director". (She is now one.)

The above caption could be "Film crew sets up a scene for Franco Zeffirelli's Hamlet".

When I unearth more pics I will put them up.
Posted by Simon St. Laurent at 11:25 AM