What is this Hyper-Reality You Speak?

Several times over the last twenty-two months I've posted bits and pieces about "my as of yet uncompleted 35mm short film epic" Hyper-Reality. The reaction I received after posting the first batch prompted me to look into crowd-funding its completion. (I had made an off-handed comment about perhaps pursuing that option.) Needless to say there is a lot of information on crowd-funding on the Internet. I was too busy at the time to take the notion any further.

It's time I post a TV Guide-style description about Hyper-Reality.

What started as a more conventional concept about four twenty-somethings, turned into a colourful and fantastical one. I had originally written two drafts of the script with a friend of mine. What had been titled "Afterglow" morphed when, through a mutual friend, I met Tim A. Cook. He reviewed the material with me and said: "I'll put some money in if you add a couple of space aliens." I readily, and for some reason, happily, agreed to his suggestion and the two of us worked the concept until it became "Hyper-Reality". (The title makes sense, believe me, and it came to us naturally without trying to brainstorm title ideas.)

Here's another teaser: About six years ago Paramount Pictures (and producer Mary Parent) put into development a similar concept. Its title? Hyperdrive. A friend and former coworker emailed me one day after he reviewed the studio development and production boards as part of his sales job: "(The premise) sounds eerily familiar?" 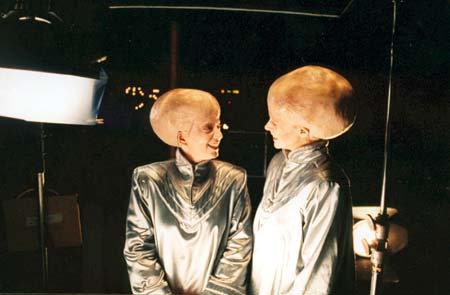 What's the status on the crowd funding these days? It's gotta get finished!

I will be firing up that plan in the new year. Yes, you are right. It does gotta get finished.

Thanks for your support!