A Club With Too Few Members

There is so much potential power in this simple cut of paper; a voting ballot for the upcoming Ontario provincial election: 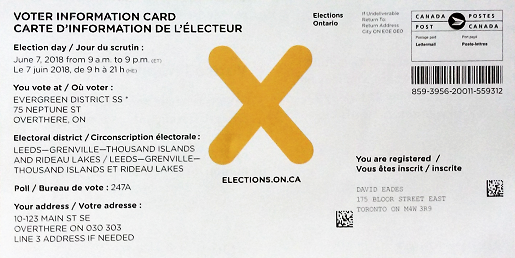 As an Ontarian, I exercised my democratic right: I voted in the advance poll.

A friend of mine came to Canada from his native country years ago. I asked him, somewhat already knowing the answer, if he was allowed to "speak out" while living there.

"Are you kidding?! You could talk about how red the tomatoes were, or how green the cucumbers, but don't dare say anything out loud against the government. You had to be really careful who you were talking to."

We Canadians have so much to be thankful for, including our freedoms. Canada is a member of an all too exclusive club. Here, my friend could talk about how amazingly fresh our produce looks: "The cucumbers sure look green; but so too do certain members of our government."
Posted by Simon St. Laurent at 12:37 PM