Quickly I awoke and began to process startling data inputted before my internal processors were at peak efficiency.

Over the course of getting ready for school I learned exactly what was known at that point from listening to the CFB Baden-Soellingen radio news. There had been an explosion on-board the Apollo 13 spacecraft's Service Module nullifying any chance of carrying out the latest mission to land two men on the moon. Now it was a matter of survival as electrical and environmental systems were quickly depleting. The third manned moon landing would have to wait.

When I arrived at the base's elementary school the talk on the playground was, no surprise, about the top news story. We were all space-race/moonshot kids so any developments of importance, especially those regarding the now troubled Apollo 13 mission, were a big deal.

Into Mrs. Quance's classroom: Through some process of elimination I was picked to stand before the class and update eager and smiling kids on the morning's most current affair. For valid reasons, I'm sure, I was considered to be the resident Jules Bergman: The red cue light came on and the floor director gave me the big signal. ("This is fun.")

The following few days were tense. We all 'prayed' for the safe return of American astronauts James Lovell, John "Jack" Swigert, and Fred Haise to the protective wrap of Earth.

In an age when the moniker of "hero" is thrown about constantly and unconsciously, for me real heroes are guys like the above. (Yuri Gagarin and Alan Shepard would be at the top of my space-traveller-as-hero list.)

Success came after much difficult work, which included constant calculations and recalculations, by the brilliant men and women at NASA and beyond, and by the astronauts themselves. The Apollo 13 Command Module (the capsule) splashed down onto the South Pacific Ocean on April 17th, 1970.

A couple of months ago I watched a documentary that did a fine job of retelling the tale, and after being refreshed by details and personal reminiscences from those involved with the near-tragic flight, I was moved by archival footage of the space capsule hanging from its cluster of three parachutes. Maybe part of the effect was from being taken back to a memorable moment of my childhood. 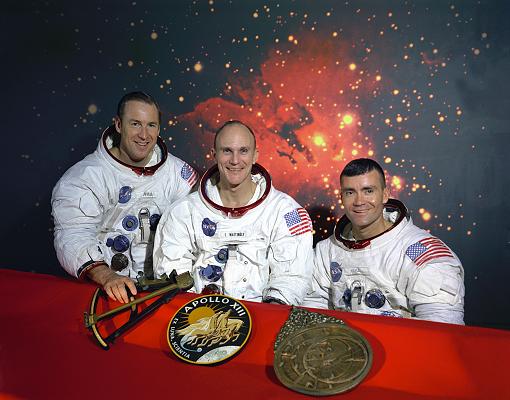 Interesting...never read about people's perspective on this event before.

I know what you mean. My postings such as this are not through ego (I hope; plus my own keeps rolling under the fridge), but I find people's like reminiscences to be interesting.