Nobody needs to act as a freebie shill for Google, but I've seen a television spot extolling the virtues of owning a Chromebook....and I must act.

Normally I don't pay attention to TV adverts ("As Seen on TV!"), but repetition can work its way through my defence screens, given the right tickle.

Yes, it is true that Chromebook does not suffer the many ills that work a regular computer's operating system, and seemingly jam its RAM. Most of my general Internet work I perform using the Chromebook; when I opened my laptop recently to check a web bit I realized the point of those Google spots. It came to me quickly. 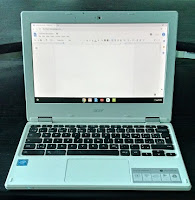