Nine years ago I wrote a satirical piece mocking a certain "letter". The Sun News Network was a Canadian right-wing television channel of limited means and a short lifespan. Watching it was to witness grand witlessness; hosts, columnists, and newsreaders who were so focused on their own angry view that they failed to realize, and admit, that their audience was too small to support them. Matters got really bad for SNN when the ratings came in, and got worse. Some 'shows' were getting barely ten thousand viewers, with the average count running at about five thousand... no doubt more than a few viewers were like me: there for the laughs.
Below, my schadenfreude kicked in and inspired me.
(Sun News Network: 2011 - 2015)
____ 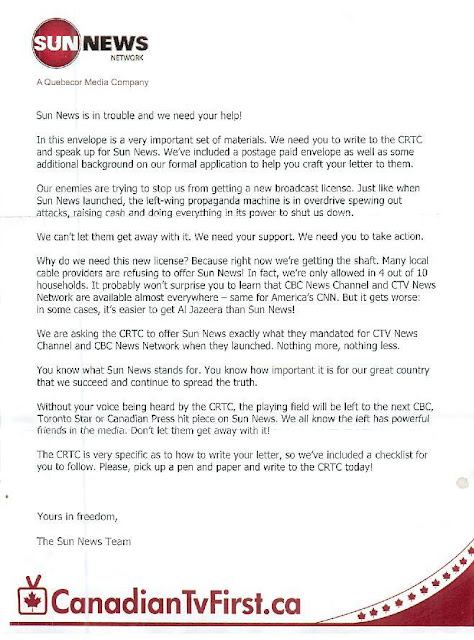 Oh, I wrote to the CRTC, all right. Got asked if I was willing to attend the hearing (would have been as a hostile witness, I think) and although I said yes, I didn't get asked in the end.

That's pretty cool. I should have written to the CRTC, too. I watched enough SNN to be able to present to the committee my feelings on the subject.

I remember watching the channel's opening few hours. It was exactly what I was expecting it to be: a platform for angry old ConSods.

I sense history repeating itself. Donald Trump has launched a Twitter knockoff called "Truth Social" -- I wouldn't be surprised if the tagline were "Whatever The Leader Says is True" -- and it hit the ground flailing.
https://www.vice.com/en/article/z3nw9e/donald-trump-truth-social-launch

I read that Truth Social had technical problems from 'second one'. I've met Trumpies... they're delusional. One told me to F.O. when I joked about "'dedicated' YouTube videos".

Thanks for the link.