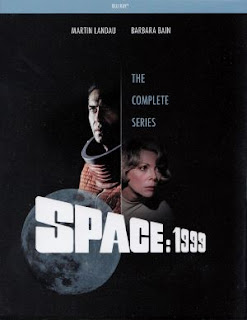 An odd series. I was a young teen when it premiered in 1975, and at that age one's smarts are starting to form, blasting one into a 'critical' mindset. If I had have been a few years younger I probably would have been smitten with the events, events often racing against molasses, on the Zenith television as it rendered cool multicolour Supermarionation-type explosions punctuated by a rudimentary and leaden sense of drama.

Space: 1999 was re-viewed by my adult self in the mid-eighties on late-night television, and I saw all of its flaws, of which there are many. This designer wants to go back in time and put some Christmas tree lights into that sparse Main Mission set... there's nothing for the actors to do, or to look at. (The actors are forever trading plastic folders.) When 1999 first aired I never got the feeling that it was 24 years into the future. A smart critic at the time noted that it looked more like five years into the future -- true, as my local Radio Shack store had more advanced-looking electronics in 1975. Also, while I watched the show in colour, the monitors onscreen were all in black & white.

The scripting was the real issue, as were the characterizations -- the regular cast, that is. The writers tried to spin profundity by having stories, too many stories, resting all too comfortably and conveniently in ambiguity... mix it with aliens whispering from behind out-of-focus Christmas tree tinsel, and the viewer can only be swept up in the magic of it all.

Cynicism through the, yes, black "sun".

When the above Blu-ray set hit store shelves in 2019, I snapped it up.