As a regular patron I have no qualms about promoting any of its programs. The mix of events put on by the TPL is nothing short of grand. (Talk of cutting funding to the system, or even outright closing branches, to me is nothing short of egregious. Needless to say there are 'elements' that would love to close branches and fire shelves-full of employees: "Stop the gravy train!" Hey, read at least one book this year and then we'll talk.)

One such event, actually two, is being hosted by the "Palmerston" branch of the Toronto Public Library. Titled and themed as "Vintage Films & Swing", the screenings are held in the library's theatre. Apparently it's a very fine venue. Not only is a previously unannounced movie projected on a screen, but afterwards a "social swing dance" group performs on the stage. I could not make the screening last week (January 17th) due to work demands, but a friend told me the flick was an obscure one: With Love and Kisses (1936). Excellent choice, even if I have not seen it. I love obscure and "forgotten" films. Many of my own faves draw blank looks from people when I mention the titles.

The screening this coming Tuesday could be fun.

I took a few minutes and converted a little flyer I picked up at the Palmerston branch into HTML:

FREE for retro pop-culture fans
of vintage Hollywood movies and
swing-era tunes... who yearn for a
nostalgia-stewed experience
to make your senses hum. 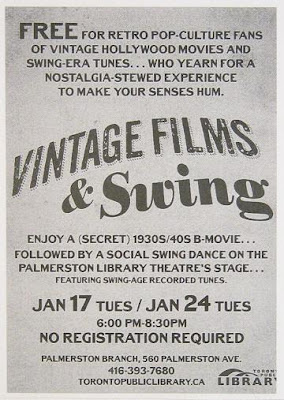 They tried to cut funding to the library in my hometown and the hue and cry shut that up pretty quick. There's an element in our society that hates "book learnin' " for some idiotic reason.