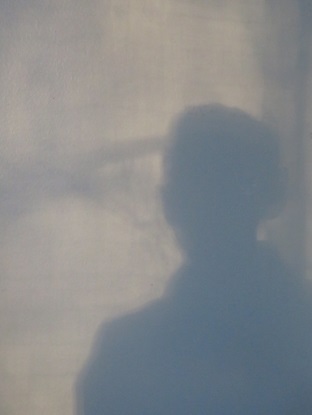 Sometimes I just don't get the meaning of your posts. Is this a post 1960's Opus 1 New York underground visual statement?
Or is it because it's your shadow?
Audience of one man.
I'm totally re-reading all of Marshal McLuhan's studies on media.
The media is the message, sure, but what is the message anyways. What is it we need to say, and why are we so needy of leaving a trace of our passage, a mark that "I was here", "I did this", and why do we so much need to affirm ourselves artistically. Is it so important ? To have that recognition ? The awards ? The status of "accomplished artist" ?
As we caucasians white supremacy attention hungry people try to occupy so much space on the internet, and get other peoples acknowledgement or approval of some kind, some other people are not there, invisible. They are working in a space that is unlikely inside their minds, the inner space. No one will ever go there, no one will ever see how beautiful it is in there, inside their soul minds. Because they won't write about it, they won't make a theatre play to show others how dysfunctional their surrounding was, and how "fucked" they became because of that. And they don't care. They will disappear as fast as they came, leaving no traces at all, no a mark to testify of their being-ness, but regardless, their presence has had a profound impact, untraceable, invisible, but solid as rock. Look around you, they are there, quiet, shy, unremarkable, but so profound.

Very good! I can accuse myself of being too literal, and too analytical, sometimes. There is some layering in that piece. Off the top: A journey to another world -- a film world -- a respite from our own real-world experiences. I'm often bemused by how many people escape into movies and television, as though that is all there is besides 'making a living'. The switch is on or off. Which is which?

Artists, small, large, or tiny, live dangerously in that they get their creations out there. If it can't be seen, or heard, it can have no affect; positive or negative.

By the way, that is a shadow of sorts. There is some layering.