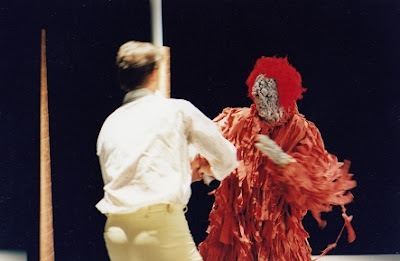 On Sunday [October 29, 2017] I posted another piece about my uncompleted 35mm short film epic, Hyper-Reality. It's Halloween today and I thought I would post an on-set photograph of the film's monster.

Actor Mike Garr rehearses a fight scene with the monster -- actually a guy [my brother] in a costume that I designed and built (with some valued assistance from Erminia Diamantopoulos).

When the fight choreographer first saw the costume, she said: "I find that really disturbing."
Posted by Simon St. Laurent at 5:52 PM