Lee was a character. He still may be; I lost contact with him a few years ago. "Irreverent" is a word Lee would have called into being if it had not already existed.

One day over beers in the local pub Lee and I shot the breeze about our sports backgrounds. As we sat on our stools at the bar I told Lee that I had been a teenage hockey goaltender. He asked who I fancied myself to be when I stood between the pipes all those years ago. A young ice hockey player "pretending" to be one of his or her idols from the big leagues is natural, almost expected. (For me it was more a pre-teen road hockey thing.)

Lee emitted his trademarked laugh, and said, somewhat mockingly: "You must have been a s**t goalie!"

I was not an "inadequate" puck-stop but that unimportant fact did not stop me from drooling a mouthful of beer down my shirt and onto my lap. 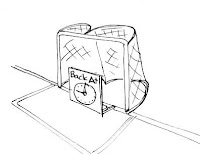