Notes from a Brat: The TV Lunchbox Kids

When I was a child in the 1960s and early 1970s TV-themed "tie-in" lunchboxes were a big thing. The colour screen on the box's exterior was probably more important than any nutrients carried on the inside. The graphic was part of your identity: Perhaps you were a Bonanza fan, a "Bat-fan", or you gravitated towards the Irwin Allen fantasy shows such as Voyage to the Bottom of the Sea or Lost in Space. It did not matter whether or not these dramatic television programs were good (they were not) but the lunchboxes were a way of advertising our programming -- a statement as to what we little ones thought was cool on television.

I remember sitting on the school bus one day, waiting for the vehicle to finish loading up kids outside of the CFB Baden Elementary School (in West Germany). A fellow traveller in the seat immediately in front of mine had in his possession what must have looked to me like a pretty specimen of a lunchbox: It had a rich green trim; it showed some futuristic vehicle; it was adorned with the title Land of the Giants. (What's Land of the Giants? I learned something new and important.) 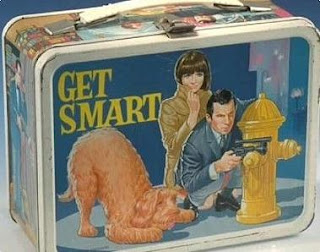 Was curious and looked that one up and I agree. You should review lunchboxes, mate!! :D

That can be done, for sure. I too did a picture search; I was taken back in time by the search results.