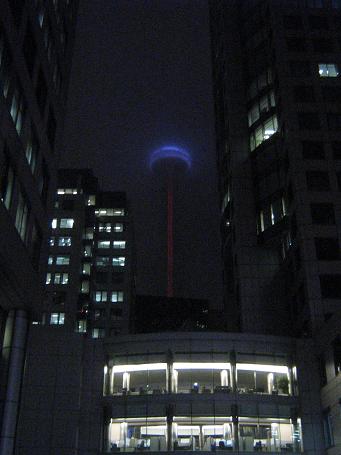 As I walked to the subway after attending an event at the TIFF Lightbox Theatre, I could not miss the light-show presented by the CN Tower. There was a light, and wet, snowfall which no doubt added to the atmosphere.

The picture was taken from King Street. My peek was between towers of Metro Hall.

(I will post about the event, "Underground: The Funnel Experimental Film Co-op 1977-1988", in the next couple of days after I work my thoughts.)
Posted by Simon St. Laurent at 10:19 PM