Jetting into the RCAF

Canada's military (the Canadian Armed Forces) is looking to replace the CF-18 fighter jet, which has been in the service of this great country since deliveries began in 1982.

The CF-18 was selected to replace the Canadair-built (Lockheed) CF-104 "Starfighter". By 1987 the changeover was complete.

Back in those days, the mid-late 1960s and early 1970s, the RCAF's main front-line jet fighter/interceptor was the CF-104 "Starfighter". Built under license (from Lockheed) by Canadair at its Cartierville Airport plant in the Montreal suburb of Saint-Laurent, the "one-o-four" went on to enjoy a long life with Canada's Finest Service; eventually being replaced by the CF-18.

With such a high-performance aircraft, especially one originally designed for high-altitude interception but re-geared for a low-level strike and reconnaissance role, there were bound to be more than a few accidents. During the years I lived in Iffezheim, West Germany, 'we' lost several 104s from 4 Wing. The most memorable incident happened in July of 1969 when two collided over the countryside. I remember vividly my father darting off for two weeks as part of the recovery/investigation team and, upon his returning, with redundant bags of sugar and other such foodstuffs, him recounting the commotion at the crash scene when they arrived: "It (a farmer's field) was crawling with Polizei". Apparently the two jets "locked wings" which sealed their fate; one pilot managed to eject while the other went down with his machine -- some of what my dad described about the impact site was pretty gruesome.

There was another: Soon after I got to school one morning my teacher told the class that a Starfighter had crashed not long after we had been bused in. (My family and I lived off-base, and not in the local "PMQs" [Private Married Quarters]. I have long been thankful that my parents wanted to live with the Germans, and not in a semi-sheltered environment called "Kleinkanada". There were lots of Canadian kids in my neighbourhood -- offspring of other smart parents.) If I remember correctly, that pilot managed to eject safely from his aircraft, despite the fact that he was in "take-off" mode.

Perhaps my fondest memory regarding the CF-104 Starfighter is of the machine's sound; that sound. One would hear the roar of jets in formation, and look up to see whether they were Canadian or German -- the Luftwaffe, too, operated the Starfighter. One beautifully sunny day my Grade 2 school teacher walked us out to the airfield; why exactly I did not know -- I'm sure Mrs. Gunnery said something, but I could not have been paying attention (surprise?). Upon taking position at our stations my school mates and I looked off over the flatness of the strip to the horizon. Suddenly there were several descending trails of black smoke which, of course, I was familiar with; moments later I noticed a series of landing lights seemingly suspended over the field. Suffice to say the 104s were flying very low, just over the deck, as they raced past us: What a noise! I love jets, and the racket they make, but really!

Ah, yes. The blessedly interesting life of a brat.... 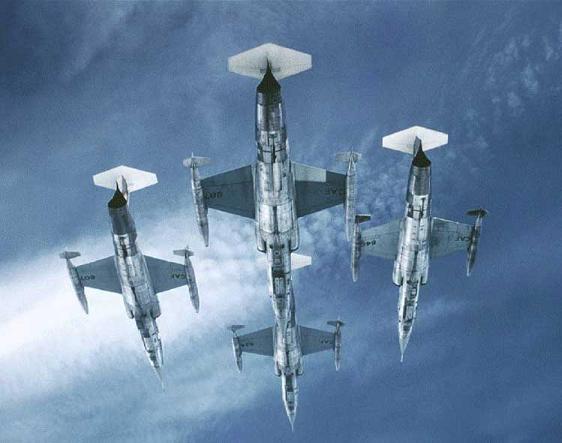