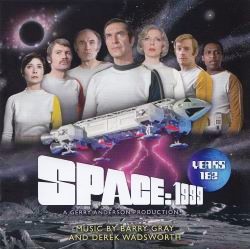 In late 1976 I bought the RCA LP record, Space: 1999. While I was a little disappointed in the incompleteness of the album, and the seemingly interminable space-out between the cuts, it contained music from the series ― its first season, as that was "1999" at that point.

Both work in that they match, respectively, Space: 1999's seasonal timbres.