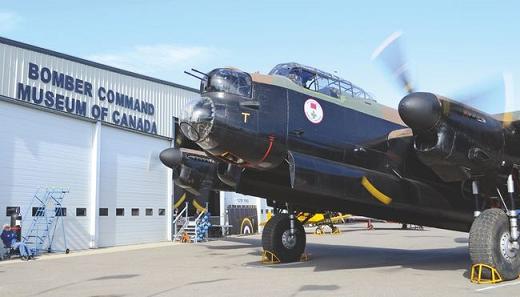 As I've mentioned a few times on this blog my father was an aerial gunner on "Lancs" during World War II. He did not often talk about his experiences, but what stories he did offer were very interesting: "I could swear my back teeth rattled out of my mouth" ... "I just kept firing" ... "I thought we were finished."

To celebrate the Avro Lancaster's first flight, which took place 75 years ago, the Bomber Command Museum of Canada will ignite its restored Lanc's four engines. This turning-of-the-propellers takes place tomorrow and it will be the first such event of the year for Hamilton's prized machine.

NantonNews.com has a story on the special occasion, here.

One correction to the linked article: The writer says the aircraft's Hercules engines will run up. While Malton-built Lancasters were fitted with Hercules engines, the museum's own example is powered by the more common Rolls-Royce type.

I live not far from there...will keep my ears peeled!

Wonderful! There is that sound.