To the Brunswick House in Passing (Annex Style) 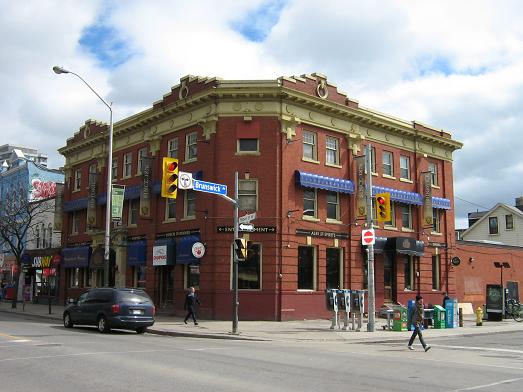 For citizens of Toronto's "Annex" neighbourhood, the Brunswick House was an important ingredient. I don't think I'd be in the minority to report that it was also a place a local citizen walked by all the time but never, or rarely, stepped into.

I certainly had more than enough time to go there for food and drink, since the establishment opened in 1876. Unfortunately, its doors are now closed -- last night was it.

The last time I entered "The Brunny" was about ten years ago: A friend of mine was a big fan of the band "Melody Ranch", and I met him there one afternoon to take in some tunes and a beer (or was it two?) By the way, that was one loud musical act. My ears were ringing when I left the big house. (It may have been the beers.)

The first time I visited the Brunswick House was on New Years Eve 1984 (?!). I remember the event very well, back in the day when that pub was still the place for students to meet up and partake in some suds: A few tables over from where my school mates and I sat, an older gentleman who clearly had a little too much alcohol intake entertained some young guys who sat in bemusement, listening to the senior drinker ramble on about something and everything. Of course, those "young guys", like me, would now be in their fifties. Equally sobering: That entertaining drinker would no doubt be long gone.

So, no lie, as a "local" I was in the Brunswick House a total of two times in 375 months (31.25 years). I'm a good Annex citizen, albeit an embarrassed citizen.


A footnote: The Brunny structure is going to be turned into a drugstore, which I find kind of odd since there is a big Shoppers Drug Mart store little more than a stone's throw away. Not only that but that particular grand and grossly overpriced Shoppers is being expanded substantially. Will this be some sort of "drug war"?

I'm guessing this new Rexall pharmacy location will not be around for 140 years.
Posted by Simon St. Laurent at 9:19 AM

Kinda sad, from a cultural heritage (and certainly nostalgic) perspective. Does the building have a heritage designation? I hope it is not sacrificed in the interest of capitalism. Now, not being a local, and having been there only once I can remember; I can't usefully comment on the products or services the establishment had to offer over the years. I certainly try, however, to support any establishments local to me that offer products and services of value. As for the whining about the late-night noise and rowdy behaviour: The place was there generations before any of you were born, ya commie-pinko yuppies! You wanna live near a major commercial thoroughfare in a major city? Suck it up, Buttercup!

You make some interesting points. As far as the "heritage designation" is concerned: After I took that affixed snap shot of the Brunny (on Friday afternoon) I reduced the photo file for its spot in my blog post; I realized then that for all the years I've lived in The Annex this was perhaps the first time I scrutinized the Brunny building as an overall structure. After that I realized perhaps it should have some protected status.

It's odd how 'we' never popped into the Brunswick House for drink. Whether I was out with friends or I was entertaining someone who was visiting, it was never The Brunny. It was: "Well, there's Kilgour's, Paupers,...."