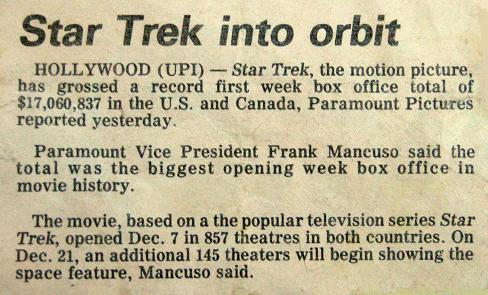 I kept the archival browning intact.

The above is a little newspaper clipping from the (I'm guessing) Toronto Sun regarding the week following the December 7th, 1979, opening of the very first Star Trek movie; titled, simply enough, Star Trek: The Motion Picture.

I remember reading at the time -- in another newspaper piece -- that the film took the classic dip after its opening week but regained some of its traction with the movie-going public immediately afterward. It ended its run having made a lot of money, but not as much as Paramount had hoped for considering the investment.

The last time I saw the featured film was about fifteen years ago: I like it more "now".

Did I see Star Trek Into Darkness? No. No interest whatsoever.

Sybok? I have not seen that movie since it came out. It does have one superb scene, however: McCoy and his father.