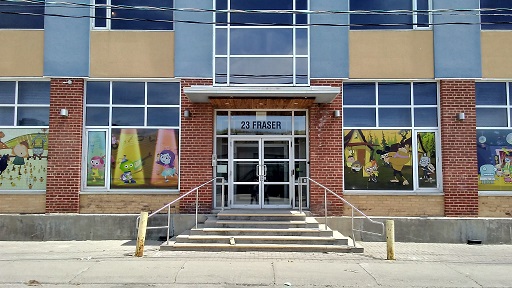 The building has since been refaced, but 23 Fraser Avenue carries many memories for me as it was one my places of employment for a few years. When I started working there in late 1994 it was packed to the gills with various production and media companies. It seemed every nook and cranny was put to good rental use. The primary tenant was Film Opticals of Canada Ltd., for which I worked, often into the wee hours of the morning shooting film and composites.

In the back of the building were two soundstages: 23 FPS Studios 1 and 2. (I utilized both stages for principal photography on Hyper-Reality, my uncompleted 35mm short film.)

For a while I had an office at the front of the building -- cheap rent at the time.
Posted by Simon St. Laurent at 6:58 PM