A Memory of a Stan Lee Creation

I couldn't put it down. Actually I put it, The Amazing Spider-Man #33, down on a table in the base PX's cafeteria at CFB Baden-Soellingen. My dad bought me the comic book minutes earlier after I saw it sitting on the news stand. (For himself he may have grabbed the latest issue of the Stars and Stripes.)

We were living in then West Germany when I cobbled that memory. As I found out many years later, issue 33 was first published in February of 1966, which predates my acquiring the book by a few years. I'm guessing it was a reissue; either that or the distributor had some copies remaining.

About ten years later a friend of mine knew exactly and without hesitation what issue I had read. There were others, and from different franchises, but a story about Spider-Man stuck under machinery in a rapidly flooding compartment was most memorable. And, as Lorne, my comic book authority mate, said, number 33 is a famous issue of Spidey.

Stan Lee, who died on Monday at the age of 95, knew how to spin a story, any size. 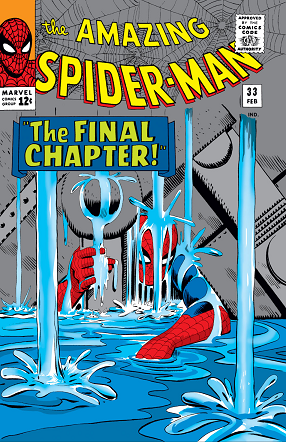