My Bio for a Music Gallery Programme 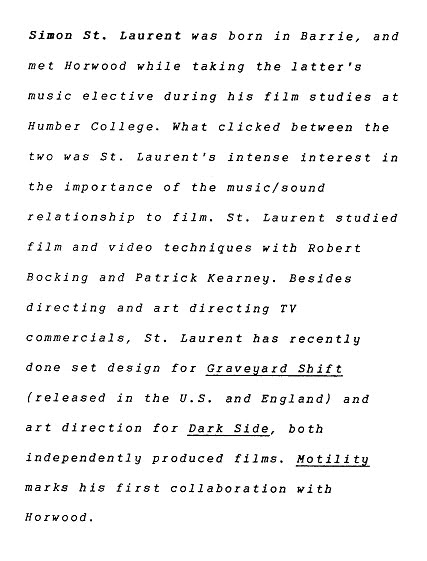 In late 1987 I was commissioned by American-Canadian composer Michael Horwood to make an experimental film to run with his musique concrète piece, "Motility".

The following April a dual performance took place at Music Gallery on Queen Street West, here in Toronto, as part of a series titled "Electro Village".

Soon I hope to undertake a restoration of the 44 minute film, and possibly do a George Lucas: add layers and elements that weren't there before. (The difference being that I will offer a high-quality original version along with the new.)

"Simon St. Laurent was born in Barrie [sic], and met Horwood while taking the latter's music elective during his film studies at Humber College. What clicked between the two was St. Laurent's intense interest in the importance of the music/sound relationship to film. St. Laurent studied film and video techniques with Robert Bocking and Patrick Kearney. Besides directing and art directing TV commercials, St. Laurent has recently done set design for Graveyard Shift (released in the U.S. and England) and art direction for Dark Side, both independently produced films. Motility marks his first collaboration with Horwood."
Posted by Simon St. Laurent at 7:02 PM

Hi Simon and a very Happy New Year to you. Glad to see your are keeping your brain juices active and I can assure you that there's nothing better then joining visual design to music. So I'm glad to see your are (where) doing this. We have to keep in mind that Einstein was not only a Nobel Price Scientist but he was also a very talented violinist. And he said himself (don't remember where exactly I read this, but I believe it's true) that there's nothing better for the development of the brain then dancing ballet on live music. He was very specific about the "live" component of the music. So yes, I admit with no shame that I took for 6 months Ballet Bob's introduction classes at the Ballets Canadiens on Jarvis. I also though that ballet would give me extra control and steadiness and grace when following actors with a camera in my hands, which it did!

Happy New Year to you too, Francois!

Thanks for the notes about Einstein. The combination of music and picture is something special. The happy accidents can be thrilling. With "Motility" being musique concrète, I did not do any Mickey Mousing -- I just let 'er rip!