On Monday night’s edition of TVOntario’s outstanding current affairs television program The Agenda was a segment on the subject of science and some people’s resistance to science.

The special guest was Lee McIntyre, a Research Fellow at the Center for Philosophy and History of Science at Boston University, and author of The Scientific Attitude: Defending Science from Denial, Fraud, and Pseudoscience.

He spent a few minutes talking about The Flat Earth Society, and similar societies, and recounted an experience he had attending a conference for one such group. Mr McIntyre spoke at the meeting but, no surprise, took the alternative view.

I too will deny the concept of a flat Earth by presenting some incontrovertible evidence.

I doubt very much The Big Cheese was able to cast a large enough adhesive sheet for a disc-shaped Earth’s backside, and it was probably for this very reason that he made the bold decision to build the Earth as a sphere. Problem solved. It was so successful, he modelled all the solar system’s planets in the same manner. (Of course, our home planet was the template. Maybe it was Planet X.)

For some reason those bodies lack deniers. (Martians stick with hard science. Their planet's rarefied atmosphere helps in that regard.) 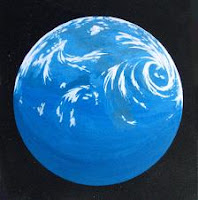 I don't think that McIntyre was able to convey just how far such people will go to preserve their worldview. They simply deny that other worlds exist and insist that all images and science results from space probes are faked by a huge global conspiracy, generally referred to as "NASA" for short.

It's fascinating stuff, but it left the realm of proof and disproof a long time ago.

McIntyre raises some interesting questions about a flat earth. What would be under the surface and how far down does it go? What happens when a volcano erupts or an earthquake happens?Where does the lava come from and where is it stored? I could go on but you get the picture. The idea of a huge globe flying around in space is unsettling but a flat earth is even more so.