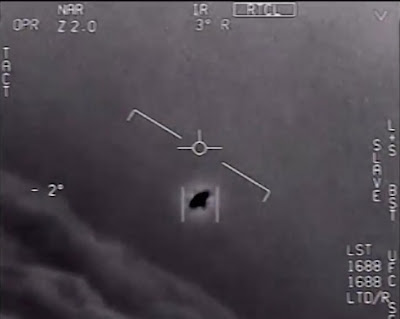 "Unidentified Aerial Phenomena." Perfect. UAP sounds an awful lot like an old film production and distribution company, but maybe that's the joke. Recently, and officially, released video footage captured by U.S. Navy fighter jets seems to bear out the notion that these objects are something right out of a 1950s UFO flick.

Do I believe that aliens from another world are visiting us? Not really.

A friend told me he thinks we're alone in the universe, and he was quite passionate about it.

My reaction was typical. "In this entire universe, we're the only advanced beings?" Knowing that he is a fan of space shows, I thought I would add a brain buster: "And there aren't humanoids out there that speak a passable English?"

He smiled at that one. Then he shook his head gently to reaffirm his earlier point.

I'm of the mindset that possibility breeds probability. We just don't know about each other. These otherworldly intelligent beings too are restrained by simple physics.

We'll have to depend on stellar flicks like Starship Invasions (1977) to keep us believing....
Posted by Simon St. Laurent at 8:25 AM

I received an email from an old friend of mine regarding this posting. Richard Van de Water is a particle physicist at the Los Alamos National Laboratory in New Mexico.

"Every time science advances, it shows that there is nothing special about humans. We are probably some of the dumbest creatures in the universe!"

Curious to know your take on UFOs and what they might be...