Dr. Who and the Daleks - One Dell of a Comic Book (Repeat) 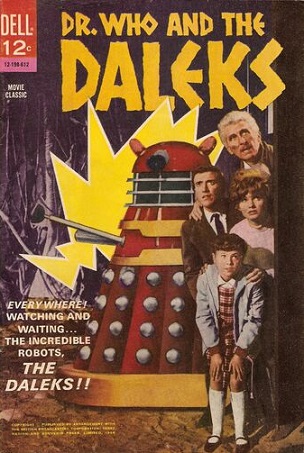 Nineteen Sixty-Six, RCAF Station Greenwood, Nova Scotia. After I received my latest crew cut, my dad bought me the Dell comic book, Dr. Who and the Daleks. It was a fair trade. Funny how little kids will sit still and behave for a few minutes of unpleasantries to get an ultimate and highly valued reward.

I loved that feature film "tie-in" comic in the same way that one's pet cat might love a certain polyester sock. It's very possible I rolled around on the rug with my prize.

Back then the CBC played the television series Doctor Who, from which the above feature film sprung, and I remember being scared sitless [sic] whenever the Daleks appeared in the seven-part serial "The Daleks". (Perhaps it was due to parental discretion that I did not attend the original theatrical release of Dr. Who and the Daleks.)

That book is long gone. Decades ago it was exterminated.
Posted by Simon St. Laurent at 9:34 AM