On Monday I wrote a piece about the 2018 book "Space Odyssey - Stanley Kubrick, Arthur C. Clarke, and the Making of a Masterpiece". Writer Michael Benson tells an absorbing tale of how one of the greatest motion pictures came to be -- its birth and life, and continuing life. Kubrick's masterpiece refuses to give easy answers. For me, thinking about 2001: A Space Odyssey is as pleasurable and natural as watching and listening to it.

2001 is magnificent, something I've 'known' since I first saw it at the age of ten. That screening is perhaps the most profound movie-going experience of my life to this point in time and space. (From what I can gather, there are no threats on the horizon). And it resonated with me to such a degree that it stayed with me for weeks; months. Of course being so young did not exactly help me understand the film from a thematic perspective. I saw the flick at CFB Borden's Terra Theatre with my next door neighbour and friend, Glen. We were shuttled home by his older brother who gave us the rundown as to what we had just seen and not entirely understood. Our chauffeur had read Arthur C. Clarke's book version, which functioned, and still does, as published footnotes for 2001 the movie. (A few months later I grabbed the book from the Ontario Science Centre bookstore during a school trip. So eager was I to assimilate the code-book that I started reading it on the bus ride back to the base.)

Every screening of 2001: A Space Odyssey renews my love and respect for one of my favourite pictures (a picture of art). And more is revealed.

Mr Benson's "Space Odyssey" gave me a much greater understanding of how the cosmic mind work was conceived, developed, and constructed: a special universe built by many talented people. That story is a page turner. 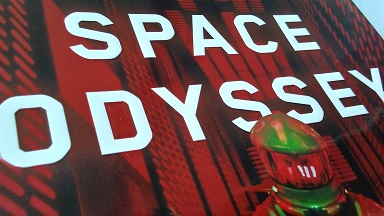