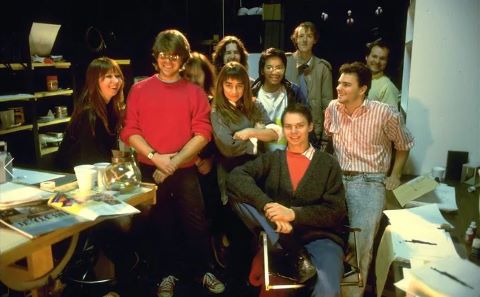 In October of 1988 I worked on a few episodes of the television series titled, simply enough, and not with any nod to accuracy, Friday the 13th: The Series.
The show's visual effects supervisor was John Gajdecki, one of the more talented film-artist/technicians to have worked in this town (Toronto), and also one of the most congenial. He went on to set up his own company, GVFX (Gajdecki Visual Effects).
When I worked at Film Effects - Toronto in the early to mid 1990s, I again met up with John when my employer and GVFX got the 'opticals' contract for the television series Kung Fu: The Legend Continues. John, and his team, produced original FX elements on a Quantel "Harry" system at his facility; elements which he then outputted to 35mm film, which were then turned over to Film Effects. I took these film rolls and composited them with the appropriate live-action photography on the optical printer/camera.
Back to the photo.
My friends would spot me in a second. I've already gotten: "You look the same!" Think: a tall British-looking guy standing at the back in a brown jacket. My boss is sitting at the front of the gang.
Seeing my overall look now, I don't think I fit the image of an "inker" as much as I do a director from LWT or Thames Television.
Postscript: I remember most of the people in that photo. Gudrun Heinze, extreme left, and Claude Theriault, to my left, I more than remember since they were still with John during my Film Effects years. Fun times, even with the hard work and sometimes long hours.
Posted by Simon St. Laurent at 3:03 PM

Trivia: A friend of mine was working on War of the Worlds, across the lot from this series. He referred to Friday the 13th: The Series as "Friday's Curse", for that was its name at that early point ― before I got some work on it.

TV shows that tie into successful film franchises tend to have lumpy titles, don't they? Ie "Terminator: The Sarah Connor Chronicles". The need to attract fans of the movies, I suppose.

I've not seen any of Terminator: The Sarah Connor Chronicles, but I'm guessing there's a thread of a connection, at least.