Sprinkled with references to the fine art of LP collecting and that format’s reproduction, and driven by a great pop music mystery, The Run-Out Groove, true to long playing record form, starts on the outside and works its way to the centre, entertaining us with its journey of song and the seemingly silent bits in between. The gang from the first Vinyl Detective novel are back: the partner, and partner, Nevada; the opportunistic and lustful Tinkler; the authoritative and somewhat enigmatic Stinky; occasional chauffeur and continual object of someone's unveiled lust, Clean Head; and Turk and Fanny, the unnamed detective's two very real cats. A formidable cast of characters. "Coffee" is back, and in fine form; an object of desire always in ample supply.

Due to my positive reaction to Written in Dead Wax, reviewed here, I made a point to read onward. And I'm glad I did.

Author Andrew Cartmel proves he can tell a story and tell it well. Record collecting and music reproduction techniques are an interest of his, which allows for some fun and informative (and relevant to the tale told) reading.

His first adventure consisted of the search for a rare record; his second the search for a lost child. Specifically the child of Valerian, lead singer of a great rock band of the 1960s, who hanged herself in mysterious circumstances after the boy’s abduction. Along the way, the Vinyl Detective finds himself marked for death, at the wrong end of a shotgun, and unknowingly dosed with LSD as a prelude to being burned alive. And then there’s the grave robbing…


The book's end revelation (What did happen to the child?) is most satisfactory, but the quality of storytelling here lends credence to the old saying: Half the fun is in getting there.

One of my favourite chapters: it has to do with a tent in an old church graveyard. (I may have heard some Jerry Goldsmith here.)

“He doesn’t have a stomping ground. He doesn’t stomp. In fact, he doesn’t get out much.” Tinkler’s idea of an adventurous evening was smoking dope and sitting in front of his hi-fi. It has to be said, it is a very good hi-fi. 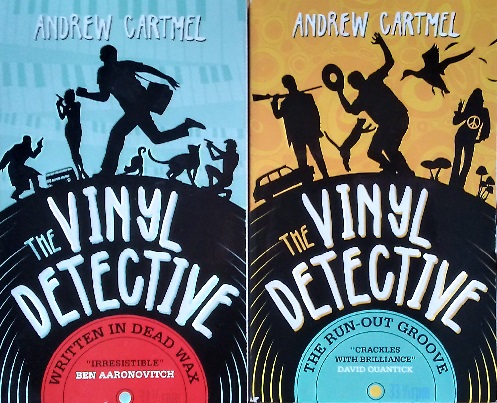 I'll have check this author's work out sooner instead of later.

Your review is bracing. Thanks!

Yeah, these books are well worth checking out. My source: "Indigo" in the Manulife Centre.