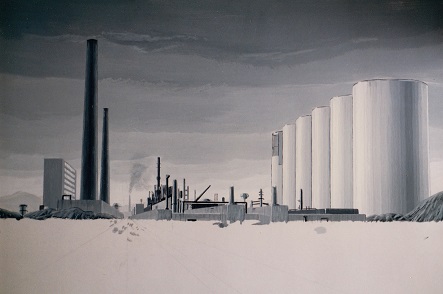 Back in late 1988 I designed some concepts for a low budget feature film. A few of these were 'optical matte painting' shots, an attempt by the producers to "open up" the film. Unfortunately, as was often the case with older low budget pictures, the wish to include matte shots was one of the first things to be jettisoned. (Now, of course, for peanuts one can whip up something on a computer.) And forget about hiring a matte artist when you have no money; he or she is of a very specialized craft and charges accordingly.

The film was photographed in black and white, hence my monochrome still photo.

To those Trekkies or Trekkers out there it's pretty obvious I was inspired by Albert Whitlock's paintings for Star Trek, specifically his artwork for the show's second pilot episode, "Where No Man Has Gone Before".

The above piece was originally posted on November 1, 2017.
Posted by Simon St. Laurent at 5:24 PM