Those in the Know Got It (Toronto Sun Letter)

This minor scribe has had a good success rate having letters published in the Toronto Sun, although it's been years since I've submitted any compositions of the type.

The letter below was printed on March 24, 2009, a few years before the Sun lost its last 5% of any journalistic integrity. 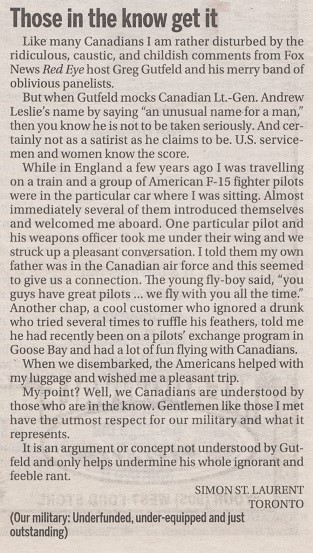 Those in the know get it

Like many Canadians I am rather disturbed by the ridiculous, caustic, and childish comments by Fox News Red Eye host Greg Gutfield and his merry band of oblivious panelists.

But when Gutfield mocks Canadian Lt.-Gen. Andrew Leslie's name by saying "an unusual name for a man," then you know he is not to be taken seriously. And certainly not as a satirist as he claims to be. U.S. servicemen and women know the score.

While in England a few years ago I was travelling on a train and a group of American F-15 fighter pilots were in the particular car where I was sitting. Almost immediately several of them introduced themselves and welcomed me aboard. One particular pilot and his weapons officer took me under their wing and we struck up a pleasant conversation. I told them my own father was in the Canadian air force and this seemed to give us a connection. The young fly-boy said, "you guys have great pilots … we fly with you all the time." Another chap, a cool customer who ignored a drunk who tried several times to ruffle his feathers, told me he had recently been on a pilots' exchange program in Goose Bay and had a lot of fun flying with Canadians.

It is an argument or concept not understood by Gutfield and only helps undermine his whole ignorant and  feeble rant.