Subject: A letter I wrote to the editor of Toronto's exemplary newspaper, the Toronto Sun. It was in regards to the highly anticipated arrival of the Sun News Network, and in response to an editorial from the day before. My letter was not alone as there were four others. Enjoy. 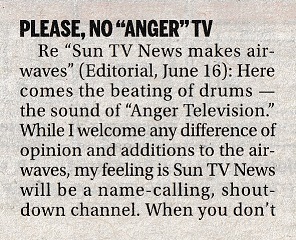 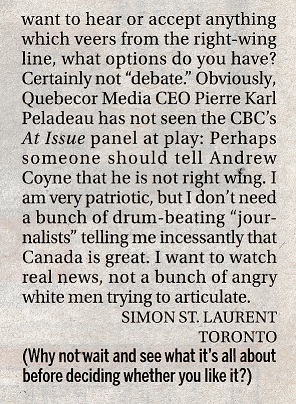 Re "Sun TV News makes airwaves" (Editorial, June 16): Here comes the beating of drums -- the sound of "Anger Television." While I welcome any difference of opinion and additions to the airwaves, my feeling is Sun TV News will be a name-calling, shout-down channel. When you don't want to hear or accept anything which veers from the right-wing line, what options do you have? Certainly not "debate." Obviously, Quebecor Media CEO Pierre Karl Peladeau has not seen the CBC's At Issue panel at play: Perhaps someone should tell Andrew Coyne that he is not right wing. I am very patriotic, but I don't need a bunch of drum-beating "journalists" telling me incessantly that Canada is great. I want to watch real news, not a bunch of angry white men trying to articulate.

(Why not wait and see what it's all about before deciding whether you like it?)