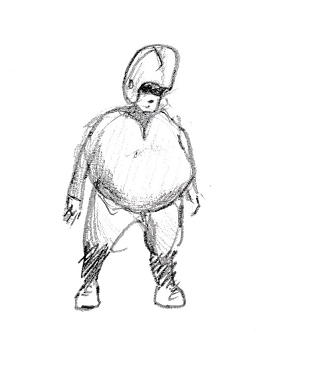 Sketchpad on the lap. The 'radio' tuned to ZoomerRadio. Think of characters.

A few thumbnails pop onto the paper.

Who is this guy? How did his parents name him? I'm going to use him; I know just the project. He'll be a star.

I can imagine who he might be: He hangs around on a TTC (Toronto Transit Commission) subway station platform ― specifically "St. George" Station ― but never actually boards a train. He stands there, in some sort of spiritually lost limbo, not sure in what direction to travel, and not sure if he wants to leave, if at all, via the "Bedford" or "St. George" exit.

With further imagination I begin to believe he's a former University of Toronto student; Law was his first course, but switched to Engineering Science after he figured it might be easier. It wasn't easier. And now he's drawn back to this place. Life takes an unexpected course. Can he go back and try it all over again? (That outfit he wears tells me he was the water boy for the Varsity Blues football team, circa late-eighties.)

I speak with a TTC inspector who stands on the "southbound" platform. It is important for my own sanity that I ask the big question.

"He's here almost every time I'm at this station", I offer.

The inspector answers, without editorial or judgement: "His name is Dennis."

Yes. Dennis. Dennis shall be his name!
Posted by Simon St. Laurent at 10:01 AM