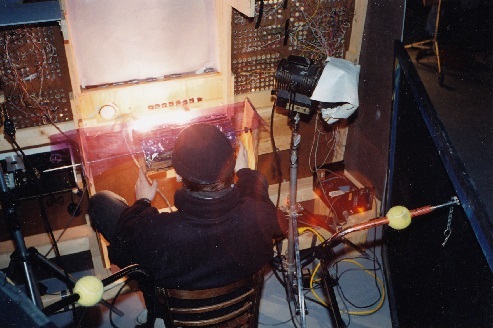 By the way, the panels appeared in the television series Lost (2004 - 2010). My guess is they are still available for rent.

When designing my (as of yet unfinished) short film Hyper-Reality, I used the panels in question as a guide. The story requires a retro look. I had a lot of fun conjuring up this piece of fanciful equipment, but credit must go to Dennis Pike for the hours of construction, and wiring the many light bulbs ― "blinky lights" necessary to sell this machine as coming from a 1960s Irwin Allen television program.

The photo affixed above features a crew member operating a piece of projection equipment.

A special shout-out to Emily for advising me to skip surfacing the prop's back in pink silk Chiffon. You were right: it would have been an unnecessary expense; and it would have added nothing aesthetically.