While listening to BBC Radio 2 yesterday I learned that the 1980 Dino De Laurentiis feature film release, Flash Gordon, is enjoying a re-release in UK cinemas.

I saw that picture when it first hit theatres, and thought it was just good enough that I didn't wish for a money back guarantee. Visually, the film was beautiful. The design work was upper craftsman. Colours curled and flowed, broken by vertically-charged gleaming sets expected in such a big budget production.

No expense was spared, but the script, what made it to the final cut, was sparse: wrapped in moments demanded, too fearful of straying from halftone origins. The result was something we'd seen many times recently before. Just a few years earlier, similar influences had been re-spun, and most effectively, with audiences thinking they were seeing something new.


From the website, "Top10 Films":
“Flash Gordon” Returns To UK Cinemas For 40th Anniversary
Flash Gordon will return to cinemas for its 40th anniversary. 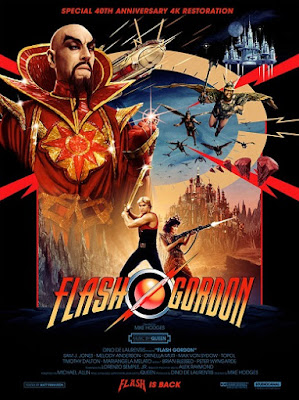