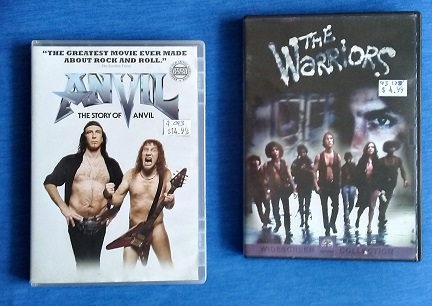 Recently I walked past BMV Books on Bloor Street, here in Toronto, and decided to poke around inside the store.

Down to the basement where the DVD, VHS, BD, CD, and LP collections are kept.

As I've mentioned on this blog before, I'm not a big collector of movies-on-DVD. Call it "being cheap"; call it "I love movies but not that much", where I must have a copy on my shelf.

"Anvil." (Good price, I'll grab it. It is a terrific documentary.)

On my way to the desk a title caught my attention. I remember when The Warriors was released to theatres in 1979. It was a big deal in that some people released some violence in their local movie houses, deciding to settle old scores. These unfortunate events made the news, and, from what I understand, gave the film an undeserved bad reputation. Its fans say it's really a cartoon of sorts. (The label says $4.99, which means this disc is mine.)

I've never seen the flick, but I know its famous line: "Warriors, come out to play-i-ay."

Post Script: As I was preparing the photo above I noticed some similarities. Interesting.
Posted by Simon St. Laurent at 3:02 PM

For me, it's right up there with American Movie in illustrating artistic passions fighting through "life".