Yesterday a friend reminded me that it was film composer Jerry Goldsmith's birthday "today" -- he would have turned 89. Also, actor Jonathan Frakes tweeted that Goldsmith is one of the most inspirational artists he has ever worked with.

What impresses some of us about the late great film-music composer is his body of work. Take a step back and look at the variety of scoring. From horse operas to space operas, with small and intimate films in between: Wild Rovers to Star Trek - The Motion Picture, with A Patch of Blue and some Gremlins. From television: signature themes for Dr. Kildare, The Man From U.N.C.L.E., and The Waltons.

I met Goldsmith at Toronto's Roy Thomson Hall in November of 1990. He had three concert dates where he played a sampling of his movie material. While I chatted with some people in the lobby after the concert I overheard an older gentleman telling another regular concertgoer (they were dressed like season ticket-holders) his feelings: "I was very impressed . . . it must take an incredible mind . . . that's a lot of music."

"Mr. Goldsmith, I finally get to meet you. I've been a fan for twelve years." I remember the slight smile on his face. Oh yes, another nutty fan. (I was one of many nutters in that lineup.)

I was uncharacteristically a little nervous. Big name, small name, I don't care. But. I'm thinking: "This is the guy who wrote Ave Satani !" 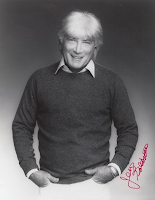