Looking Back at a Toronto Film Screening Series 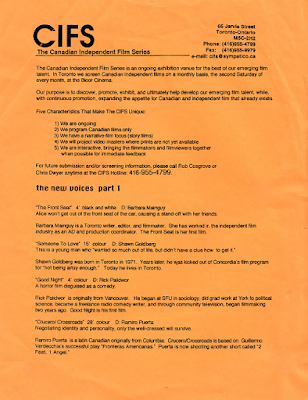 It's a bad flyer when there are no dates affixed.

The venue: The Bloor Cinema, Toronto


CIFS was run by Rob Cosgrove and Chris Dwyer. The programs were well done but the series as a whole was short-lived.

The above piece was first posted as "CIFS Screening Series Flyer" on December 4, 2017
Posted by Simon St. Laurent at 10:31 AM