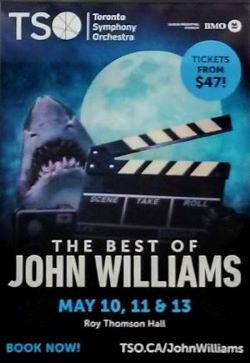 While travelling on the Toronto Transit Commission's subway system today, I sat across from an interesting poster. John Williams' film scores, the best of, apparently, are being performed at Roy Thomson Hall by the Toronto Symphony Orchestra. As the poster says: May 10, 11 & 13. (Today's the 13th ― I'm late.)
I did hear something a few days ago about these performances, but never moved a muscle to do anything about attending. Music from Jaws, Raiders of the Lost Ark, Star Wars, Jurassic Park, and the rest, are here on Gilligan's Isle. (Trivia: "Johnny" Williams scored some episodes of Gilligan's Island... including the theme and underscore for the pilot show.)
The concerts are billed as "The Best of John Williams".  I realize, of course, that these advertised pieces are the kind that will get people in the door. ("What's The Reivers?") What kind of career would Mr Williams have had if he'd not associated with Messrs Spielberg and Lucas?
Posted by Simon St. Laurent at 8:33 PM

The clue to how his career would have went had he not worked with Spielberg and May 14 birthday boy Lucas is there in his listings both for composer and then for other music department stuff. He was already in with some impressive productions. The real tip off is 1974 when he not only worked on Sugarland Express for Spielberg but a few other movies, two of which were high profile gigs he already had lined up - Earthquake and Towering Inferno. Because of busy scheduling issues, I'm sure you know around 1976 he almost took The Omen instead of Goldsmith. Everyone has their greatest hits the audience is interested in. And there is a certain built in entertainment seeing an orchestra create something psychologically powerful like Jaws broken down into component parts and instruments. Unfamiliar tracks might stand on their own but won't have the kick. I feel The Asteroid Field is the best example of music rising to the challenge of energizing each beat of a scene.

I'm well aware of Williams' career timeline. Indeed he was active in 1970s epic stuff... mainly because of his association with producer Irwin Allen and his 1960s tv shows.

Williams would still have enjoyed a prolific career, but it was his association with SS and GL and their respective hits that put him where he is... and why, as you suggest, orchestras play the usual suspects. (My favourite of the composer's 'epic' themes is the one for The Towering Inferno.)

By the way, Goldsmith was the first choice to score The Omen. The producers and director were worried he would turn it down as the budget allowed for just a $25,000 composer fee. Richard Donner really wanted Goldsmith to score Superman, too, but the constant delays -- on and off again -- caused a scheduling problem. And Williams did a great job... no kidding.