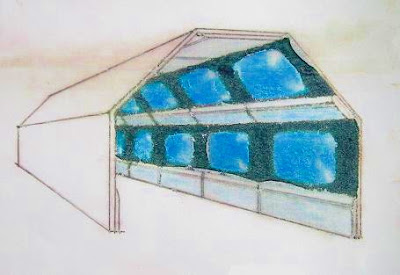 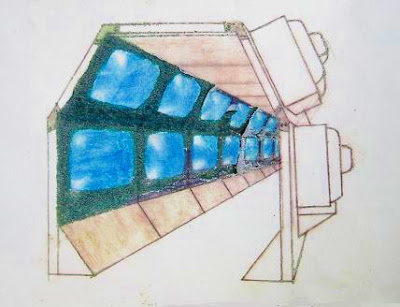 In the autumn of 1986 I was in my last year of Humber College's "Film and Television" program but I managed to find time to work as an art director on a feature film called The Dark Side.

During production the producers asked me to design a "video tunnel" set as they were in negotiations to get a loaner of many televisions. These would be incorporated into the structure. No problem; I designed away.

Not too long after I submitted my initial concept drawings I was told the deal had fallen through.

Note the tube televisions. The loading would have been something I would have had to take into consideration when designing the set framing. It goes without saying that a set like this would be much easier to do today -- and a lot cheaper. Now I would use LED flat-screens. ("Really? You would?")


(Pardon the decaying colour photocopies. As soon as I find the originals I'll destroy the evidence.)
Posted by Simon St. Laurent at 9:31 AM

Geez, I've never even heard of The Dark Side! So much to uncover in the obscure realm of Canuck B cinema...

I believe that Canuxploitation has a review.

There are so many 'unknown' films, as you know.