Soon I hope to return to "My VHS Purge". Over the next few days I will be revisiting the original "Purge" postings. Yesterday, August 11th, I started the repeat series: Repeat My VHS Purge: Battle of Britain. Below is a special feature I wrote to accompany the original posting....

Yesterday (March 5th) I posted a piece on the 1969 movie Battle of Britain as part of my "VHS Purge" series. My initial draft was too lengthy but I decided to hold the personal experiences part of the article over for a separate story of its own:

My dad took me to see Battle of Britain when it hit the CFB Baden-Soellingen movie theatre. We were living in then West Germany, specifically in a small town, surrounded by Germans, which somehow enhanced my movie-going experience. Not only do I love the sound of that language but in this movie the Germans actually speak Deutsche.

To illustrate how big of a deal this movie was at the time, there was a live-from-London television special one evening celebrating its premiere. German television network ARD or ZDF (I can't remember which) picked up the live feed: There were searchlights and men dressed in vintage uniforms manning an ack-ack gun placement. I could hardly wait to see the movie.

Unfortunately, producing-studio and distributor United Artists lost a lot of money on Battle of Britain. The film did not 'travel' much outside of Europe (read: the USA), which it had to do in order to make back the investment. As a tie-in documentary hosted by actor Michael Caine outlined most effectively, regular folk, including those on the Isles, could tell you next to nothing about the battle. And this was less than thirty years after the events. The idea of an ignorance of one's own history as being an 'American' thing is a false one. (Author Clive Cussler recounts a sobering personal experience in his non-fiction book The Sea Hunters where he was taken aback by some of his fellow Americans -- politicians in this case -- not knowing, or, more importantly, not even caring about their own history.)

As a child what I liked was Battle's spectacle: The wide-screen; the colour; the music; the you-are-there vibe.

The now-defunct "Festival Theatres" repertory chain here in Toronto would screen the film every few years, and I would be there with interested friends.

As I've told people over the years, "Battle of Britain was my Star Wars". 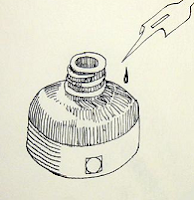