I have no plans to upload my entire "Yukon Crews" piece, but I thought I would post a few paragraphs. Enjoy!

The first flight of a Yukon was made on November 15, 1959. Deliveries to 412 Squadron (VIP) began in mid-summer 1961. Veteran pilot Bill Cars explains the process of training pilots on the Yukon: “All the pilots that were selected to fly on the Yukon were all sent to Cartierville (Quebec) and we took the ground-school. Five of us were checked out by Canadair's test pilots. I was checked out by Scotty McLean, one of Canadair’s test pilots. As soon as we had been checked out then we came back down here (Trenton) with a couple of airplanes and checked out the rest of the guys . . . one guy ran OTU (Operational Training Unit) and three would work for him. I was going back up to 412 Squadron but we took all the rest of them and converted them on these airplanes." Once the pilots were converted onto the Yukon, then began an involved trial period. Cars elaborates: "We'd go on simulated trips, raising and lowering the landing gear five or six times, flaps five or six times, and so on. This was done to simulate multiple trips. We did a few long range trips here in Trenton. We took a couple of crews and flew over to Pisa, then from Pisa down to Leopoldville, and back up to Pisa and back home again just to see how it worked on long range trips. We took turns sleeping on the airplane and that kind of stuff. It was interesting work. It kept us going that summer."

Canadair completed twelve Yukons for the RCAF: Two aircraft went to 412 'VIP' Squadron and the balance to (reactivated) 437 Squadron. 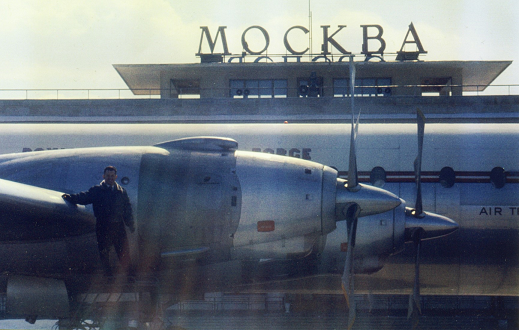 Pilot Jack Maitland poses with his "Yuke" in Moscow.


Operational flying accumulates many hours for the air crews concerned, and most of these hours would be quite uneventful. Naturally, with all these trips over the years there are bound to be stories,funny ones and otherwise. To start, and due to the intrinsic nature of the Yukon which would typically be loaded with heavy cargoes, there are a few stories of the Yukon's nose going up, and not due to any takeoff procedure. Larry Byrne remembers one such story: “East Pakistan had a typhoon go through so we flew some girders for electrical towers and a bunch of blankets and stuff and that was our load. We picked them up from Trenton. My mom and dad lived in Lachine [Quebec] and I went over to their place for lunch while they were loading the airplane. My dad drove me back to the airport at Dorval; I couldn't see the tail of the airplane over the AMU [Aviation Maintenance Unit] and I said to my dad, 'oh my God, they've left without me!' So we drove around the corner of the thing and there was the Yukon sitting on its tail. They had loaded the stuff in through the side loader and they intended to push it forward. And they put this one set of girders on there and down she went. The thing that saved the airplane was they had a big wooden tie-down box in the back of the airplane and when the girders slid back they hit the box instead of hitting the pressure hull of the airplane and so they put a bridle on the front of the airplane and then slowly offloaded then lowered the thing and reloaded it properly. The only thing that was damaged was the seal on the door; and so we flew it back to Trenton and they changed the seal and the next day we were on our way to East Pakistan, and that was my check-ride. The captain was on that was Bill Cars.“
___

Prime Minister Pierre Elliott Trudeau was a frequent flier on 412 Squadron Yukons. He is also credited, by some, with helping dismantle the Canadian Armed Forces; the fallout, of course, is felt to this day. Burke opines: “(but) ironically he was probably one of the easiest persons to fly anywhere as a passenger, he really was.  He just did not have any use for a military." (Author’s note: Pardon me while I go and paint some machine guns onto my lawnmower.) Bill Cars remembers flying Trudeau out one night: “He stood up in the cockpit for the takeoff but it was night and there were lights all around….soon as the Yukon went out and because there was this weird climb he just went to the back.”
___

One thing that was obvious to me was the fact that the individuals I interviewed all had fond memories about flying on the Yukon – and a lot of fun was apparent in the rapport displayed during the group interview I did as part of my research in CFB Trenton. This really showed when I thought I would ask a seemingly innocent question –  one brought on after hearing of some of the trips to a few 'hot-spots'. My question came out as: “Were you guys ever armed?” This elicited an immediate reaction from [Navigator] Bob Burke: “We had security people. My god, I wouldn't give these guys guns!”  [Flight Engineer] Bernie Hazleton chimes in with, “It's bad enough giving them a screwdriver”.
___

[Pilot] Doug Scott remembers the final days, “the Yukon retired on the second of April, ’71, and I retired on the ninth of April. They threw me out at the same time as the Yukon”. [Pilot] Paul Aubin transferred to the new Boeing machines when they came into service: “Going to the 707 was an ego trip but the Yukon was a great airplane, to think back….it was a wonderful experience.”

[Pilot and 437 Squadron Commander] David Adamson negotiated the purchase of the Boeing 707 which came into service with the air force in 1970 and completely replaced the Yukon the following year. Adamson found the Yukon to be “a bit of a challenge to fly” -- he admitted to me that he was always happy to get back on the ground but is very proud of the aircraft's safety record. No Yukon was ever involved in any serious accident.
___

[Pilot] James Lynch sums up his feelings on the Yukon: “The aircraft was definitely a well designed aircraft. It was a very, very nice aircraft to fly. It really was a beautiful aircraft."

The Yukon and its implementation was a memorable chapter in Canadian aviation, certainly Canadian military aviation. It was an aircraft developed and flown to fulfill a requirement laid out by our armed forces and it performed admirably – as several people in this article have noted.  Unfortunately, because so few units were produced, coupled with the fact that Canadians seem to have a hard time 'caring' about most of what we do, especially regarding our military and the many successful and historically relevant exploits therein, this aircraft is destined to be all but forgotten by all but the most die-hard enthusiasts.

For those of us who had the pleasure or honour of flying on her as either flight crew or passenger, it was a memorable chapter. To me, the Yukon was a beautiful aircraft.

As I stated at the beginning of the piece, I interviewed many people involved with the CC-106 "Yukon". They are: 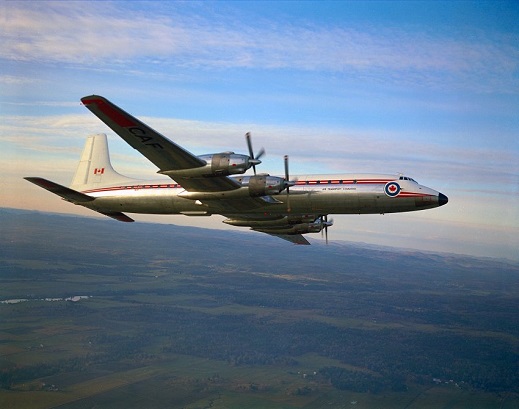